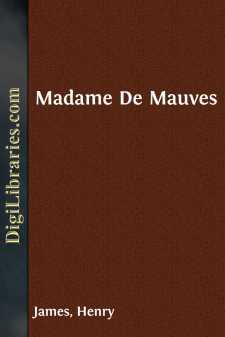 The view from the terrace at Saint-Germain-en-Laye is immense and famous. Paris lies spread before you in dusky vastness, domed and fortified, glittering here and there through her light vapours and girdled with her silver Seine. Behind you is a park of stately symmetry, and behind that a forest where you may lounge through turfy avenues and light-chequered glades and quite forget that you are within half an hour of the boulevards. One afternoon, however, in mid-spring, some five years ago, a young man seated on the terrace had preferred to keep this in mind. His eyes were fixed in idle wistfulness on the mighty human hive before him. He was fond of rural things, and he had come to Saint-Germain a week before to meet the spring halfway; but though he could boast of a six months' acquaintance with the great city he never looked at it from his present vantage without a sense of curiosity still unappeased. There were moments when it seemed to him that not to be there just then was to miss some thrilling chapter of experience. And yet his winter's experience had been rather fruitless and he had closed the book almost with a yawn. Though not in the least a cynic he was what one may call a disappointed observer, and he never chose the right-hand road without beginning to suspect after an hour's wayfaring that the left would have been the better. He now had a dozen minds to go to Paris for the evening, to dine at the Cafe Brebant and repair afterwards to the Gymnase and listen to the latest exposition of the duties of the injured husband. He would probably have risen to execute this project if he had not noticed a little girl who, wandering along the terrace, had suddenly stopped short and begun to gaze at him with round-eyed frankness. For a moment he was simply amused, the child's face denoting such helpless wonderment; the next he was agreeably surprised. "Why this is my friend Maggie," he said; "I see you've not forgotten me."

Maggie, after a short parley, was induced to seal her remembrance with a kiss. Invited then to explain her appearance at Saint-Germain, she embarked on a recital in which the general, according to the infantine method, was so fatally sacrificed to the particular that Longmore looked about him for a superior source of information. He found it in Maggie's mamma, who was seated with another lady at the opposite end of the terrace; so, taking the child by the hand, he led her back to her companions.

Maggie's mamma was a young American lady, as you would immediately have perceived, with a pretty and friendly face and a great elegance of fresh finery. She greeted Longmore with amazement and joy, mentioning his name to her friend and bidding him bring a chair and sit with them. The other lady, in whom, though she was equally young and perhaps even prettier, muslins and laces and feathers were less of a feature, remained silent, stroking the hair of the little girl, whom she had drawn against her knee. She had never heard of Longmore, but she now took in that her companion had crossed the ocean with him, had met him afterwards in travelling and—having left her husband in Wall Street—was indebted to him for sundry services....