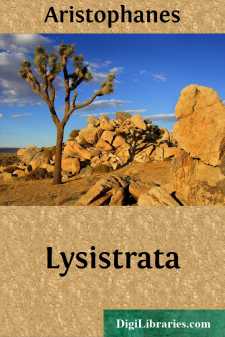 Lysistrata is the greatest work by Aristophanes. This blank and rash statement is made that it may be rejected. But first let it be understood that I do not mean it is a better written work than the Birds or the Frogs, or that (to descend to the scale of values that will be naturally imputed to me) it has any more appeal to the collectors of "curious literature" than the Ecclesiazusae or the Thesmophoriazusae. On the mere grounds of taste I can see an at least equally good case made out for the Birds. That brightly plumaged fantasy has an aerial wit and colour all its own. But there are certain works in which a man finds himself at an angle of vision where there is an especially felicitous union of the aesthetic and emotional elements which constitute the basic qualities of his uniqueness. We recognize these works as being welded into a strange unity, as having a homogeneous texture of ecstasy over them that surpasses any aesthetic surface of harmonic colour, though that harmony also is understood by the deeper welling of imagery from the core of creative exaltation. And I think that this occurs in Lysistrata. The intellectual and spiritual tendrils of the poem are more truly interwoven, the operation of their centres more nearly unified; and so the work goes deeper into life. It is his greatest play because of this, because it holds an intimate perfume of femininity and gives the finest sense of the charm of a cluster of girls, the sweet sense of their chatter, and the contact of their bodies, that is to be found before Shakespeare, because that mocking gaiety we call Aristophanies reaches here its most positive acclamation of life, vitalizing sex with a deep delight, a rare happiness of the spirit.

Indeed it is precisely for these reasons that it is not considered Aristophanes' greatest play.

To take a case which is sufficiently near to the point in question, to make clear what I mean: the supremacy of Antony and Cleopatra in the Shakespearean aesthetic is yet jealously disputed, and it seems silly to the academic to put it up against a work like Hamlet. But it is the comparatively more obvious achievement of Hamlet, its surface intellectuality, which made it the favourite of actors and critics. It is much more difficult to realize the complex and delicately passionate edge of the former play's rhythm, its tides of hugely wandering emotion, the restless, proud, gay, and agonized reaction from life, of the blood, of the mind, of the heart, which is its unity, than to follow the relatively straightforward definition of Hamlet's nerves. Not that anything derogatory to Hamlet or the Birds is intended; but the value of such works is not enhanced by forcing them into contrast with other works which cover deeper and wider nexus of aesthetic and spiritual material. It is the very subtlety of the vitality of such works as Antony and Cleopatra and Lysistrata that makes it so easy to undervalue them, to see only a phallic play and political pamphlet in one, only a chronicle play in a grandiose method in the other....