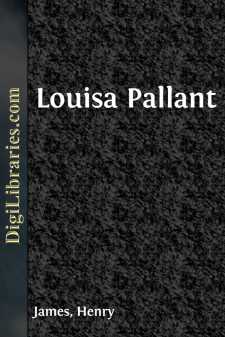 Never say you know the last words about any human heart! I was once treated to a revelation which startled and touched me in the nature of a person with whom I had been acquainted—well, as I supposed—for years, whose character I had had good reasons, heaven knows, to appreciate and in regard to whom I flattered myself I had nothing more to learn.

It was on the terrace of the Kursaal at Homburg, nearly ten years ago, one beautiful night toward the end of July. I had come to the place that day from Frankfort, with vague intentions, and was mainly occupied in waiting for my young nephew, the only son of my sister, who had been entrusted to my care by a very fond mother for the summer—I was expected to show him Europe, only the very best of it—and was on his way from Paris to join me. The excellent band discoursed music not too abstruse, while the air was filled besides with the murmur of different languages, the smoke of many cigars, the creak on the gravel of the gardens of strolling shoes and the thick tinkle of beer-glasses. There were a hundred people walking about, there were some in clusters at little tables and many on benches and rows of chairs, watching the others as if they had paid for the privilege and were rather disappointed. I was among these last; I sat by myself, smoking my cigar and thinking of nothing very particular while families and couples passed and repassed me.

I scarce know how long I had sat when I became aware of a recognition which made my meditations definite. It was on my own part, and the object of it was a lady who moved to and fro, unconscious of my observation, with a young girl at her side. I hadn't seen her for ten years, and what first struck me was the fact not that she was Mrs. Henry Pallant, but that the girl who was with her was remarkably pretty—or rather first of all that every one who passed appeared extremely to admire. This led me also to notice the young lady myself, and her charming face diverted my attention for some time from that of her companion. The latter, moreover, though it was night, wore a thin light veil which made her features vague. The couple slowly walked and walked, but though they were very quiet and decorous, and also very well dressed, they seemed to have no friends. Every one observed but no one addressed them; they appeared even themselves to exchange very few words. Moreover they bore with marked composure and as if they were thoroughly used to it the attention they excited. I am afraid it occurred to me to take for granted that they were of an artful intention and that if they hadn't been the elder lady would have handed the younger over a little less to public valuation and not have sought so to conceal her own face. Perhaps this question came into my mind too easily just then—in view of my prospective mentorship to my nephew. If I was to show him only the best of Europe I should have to be very careful about the people he should meet—especially the ladies—and the relations he should form....