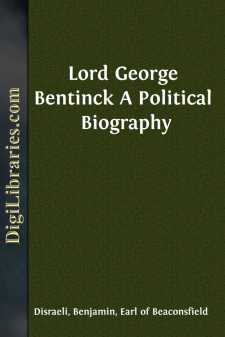 LORD GEORGE BENTINCK A POLITICAL BIOGRAPHY   CHAPTER I. The Man

THE political career of Lord George Bentinck was peculiar. He had, to use his own expression, 'sate in eight Parliaments without having taken part in any great debate,' when remarkable events suddenly impelled him to advance and occupy not only a considerable but a leading position in our public affairs. During three years, under circumstances of great difficulty, he displayed some of the highest qualities of political life: courage and a lofty spirit; a mastery of details which experience usually alone confers; a quick apprehension and a clear intelligence; indomitable firmness; promptness, punctuality, and perseverance which never failed; an energy seldom surpassed; and a capacity for labour which was perhaps never equalled. At the very moment when he had overcome many contrarieties and prejudices; when he had been most successful in the House of Commons, and, sustained only by his own resources, had considerably modified the legislation of the government which he opposed on a measure of paramount importance; when the nation, which had long watched him with interest, began to congratulate itself on the devotion of such a man to the business of the country, he was in an instant taken from us. Then it was that, the memory of the past and the hope of the future blending together, all men seemed to mourn over this untimely end, and there was that pang in the public heart which accompanies the unexpected disappearance of a strong character.

What manner of man this was, who thus on a sudden in the middle term of life relinquished all the ease and pleasure of a patrician existence to work often eighteen hours daily, not for a vain and brilliant notoriety, which was foreign alike both to his tastes and his turn of mind, but for the advancement of principles, the advocacy of which in the chief scene of his efforts was sure to obtain for him only contention and unkindly feelings; what were his motives, purposes and opinions; how and why did he labour; what were the whole scope and tendency of this original, vigorous, and self-schooled intelligence; these would appear to be subjects not unworthy of contemplation, and especially not uninteresting to a free and political community.

The difficulty of treating cotemporary characters and events has been ever acknowledged; but it may be doubted whether the difficulty is diminished when we would commemorate the men and things that have preceded us. The cloud of passion in the first instance, or in the other the mist of time, may render it equally hard and perplexing to discriminate.

It should not be forgotten that the most authentic and interesting histories are those which have been composed by actors in the transactions which they record. The cotemporary writer who is personally familiar with his theme has unquestionably a great advantage; but it is assumed that his pen can scarcely escape the bias of private friendship or political connection. Yet truth, after all, is the sovereign passion of mankind; nor is the writer of these pages prepared to relinquish his conviction that it is possible to combine the accuracy of the present with the impartiality of the future....