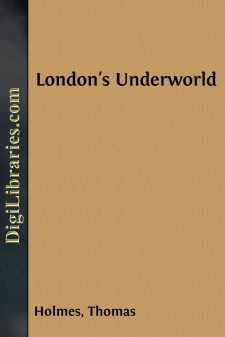 CHAPTER I. MY FRIENDS AND ACQUAINTANCES

The odds and ends of humanity, so plentiful in London's great city, have for many years largely constituted my circle of friends and acquaintances.

They are strange people, for each of them is, or was, possessed of some dominating vice, passion, whim or weakness which made him incapable of fulfilling the ordinary duties of respectable citizenship.

They had all descended from the Upper World, to live out strange lives, or die early deaths in the mysterious but all pervading world below the line.

Some of them I saw, as it were, for a moment only; suddenly out of the darkness they burst upon me; suddenly the darkness again received them out of my sight.

But our acquaintance was of sufficient duration to allow me to acquire some knowledge, and to gain some experience of lives more than strange, and of characters far removed from the ordinary.

But with others I spent many hours, months, or years as circumstances warranted, or as opportunities permitted. Some of them became my intimates; and though seven long years have passed since I gave up police-court duties, our friendship bears the test of time, for they remain my friends and acquaintances still.

But some have passed away, and others are passing; one by one my list of friends grows less, and were it not that I, even now, pick up a new friend or two, I should run the risk of being a lonely old man. Let me confess, however, that my friends have brought me many worries, have caused me much disappointment, have often made me very angry. Sometimes, I must own, they have caused me real sorrow and occasionally feelings of utter despair. But I have had my compensations, we have had our happy times, we have even known our merry moments.

Though pathos has permeated all our intercourse, humour and comedy have never been far away; though sometimes tragedy has been in waiting.

Now many of my friends were decent and good-hearted fellows; yet they were outcasts. Others were intelligent, clever and even industrious, quite capable of holding their own with respectable men, still they were helpless.

Others were fastidiously honest in some things, yet they were persistent rogues who could not see the wrong or folly of dishonesty; many of them were clear-headed in ninety-nine directions, but in the hundredth they were muddled if not mentally blind.

Others had known and appreciated the comforts of refined life, yet they were happy and content amidst the horror and dirt of a common lodging-house! Why was it that these fellows failed, and were content to fail in life?

What is that little undiscovered something that determines their lives and drives them from respectable society?

What compensations do they get for all the suffering and privations they undergo? I don't know! I wish that I did! but these things I have never been able to discover.