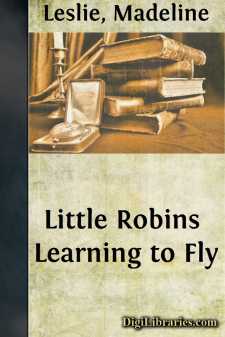 Early one May morning, Fred Symmes was sent by his mother upon an errand to the next farm. He did not go around by the road, but jumped over the stone wall, and passed along through the pleasant orchard. As he came near the pear tree, he saw a large robin flying back and forth from it, and stopping to look, soon discovered a nest in the fork formed by two of the lower limbs.

What was his surprise, as the robin flew toward the ground, to have it alight on his arm! when he at once recognized it as Mr. Robin, who had a wife and family in the elm tree near the cottage.

"Why, what are you doing here this bright morning?" he asked, holding out his finger, upon which the familiar bird readily perched.

Mr. Robin cocked his head, turned up his bright eye, and tried to explain. But as Fred did not seem to understand, and kept saying, "I hope you have not forsaken your wife and little nestlings, pretty birdie," he alighted on the ground, picked up a worm, and flew away into the tree.

Fred quickened his steps, did his errand at the farm, and on his return, found Mr. Robin had flown away. He climbed into a tree, from which he could look into the nest. There he saw a female bird sheltering her young, who were feebly chirping as she partly rose to meet the intruder.

She uttered a cry of distress, and began to flutter her wings; but Fred quickly slid down from the tree, and put an end to her alarm.

When he reached home, both Mr. and Mrs. Robin were picking up crumbs at the cottage door.

"Grandpa," said he, when they were seated at breakfast, "I saw something very funny this morning. I found our robin in a pear tree near Mr. Bacon's farm, feeding a whole nest full of birds."

"Were they alone?" inquired Mr. Symmes.

"No, father. The mother bird was there; and he fed her too."

"I suppose the father has been killed," suggested the old gentleman. "It is very cruel to kill birds when they have little families to take care of. But I have read many instances where birds have assisted each other when in distress: where the male bird has been killed, one of his neighbors has fed and assisted in rearing the young brood, at the same time he attended to the wants of his own family."

An hour or two later, grandpa sat in his arm chair under the shade of the graceful elm. Fred had brought his tools, and was converting a large wooden box into a playhouse for his little sister. Annie stood near him, her apron filled with small bits of broken china, which she called her dishes, and which she was waiting to arrange in her new cupboard.

It was very warm; and the boy's forehead was wet with perspiration. He drew his jacket sleeve across his face, as he exclaimed, "There, Annie, your house is done."

"Thank you, thank you, dear brother," cried the little girl, in an ecstasy of delight. She emptied the bright-colored crockery on the ground, and ran to the house for her dolly and two chairs; the latter her mother had made of pieces of smooth cornstalks, fastened together with pins.

"O, doesn't it look pretty, grandpa?" she asked, jumping up and down in her glee. "See Minnie sitting in her parlor. Now I'll set up my dishes. O dear!" she added, with a quick, appealing glance at her brother, "how nice it would be if I had a table!"