Literary Taste: How to Form It With Detailed Instructions for Collecting a Complete Library of English Literature 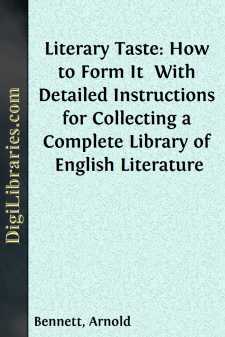 CHAPTER I THE AIM

At the beginning a misconception must be removed from the path. Many people, if not most, look on literary taste as an elegant accomplishment, by acquiring which they will complete themselves, and make themselves finally fit as members of a correct society. They are secretly ashamed of their ignorance of literature, in the same way as they would be ashamed of their ignorance of etiquette at a high entertainment, or of their inability to ride a horse if suddenly called upon to do so. There are certain things that a man ought to know, or to know about, and literature is one of them: such is their idea. They have learnt to dress themselves with propriety, and to behave with propriety on all occasions; they are fairly "up" in the questions of the day; by industry and enterprise they are succeeding in their vocations; it behoves them, then, not to forget that an acquaintance with literature is an indispensable part of a self-respecting man's personal baggage. Painting doesn't matter; music doesn't matter very much. But "everyone is supposed to know" about literature. Then, literature is such a charming distraction! Literary taste thus serves two purposes: as a certificate of correct culture and as a private pastime. A young professor of mathematics, immense at mathematics and games, dangerous at chess, capable of Haydn on the violin, once said to me, after listening to some chat on books, "Yes, I must take up literature." As though saying: "I was rather forgetting literature. However, I've polished off all these other things. I'll have a shy at literature now."

This attitude, or any attitude which resembles it, is wrong. To him who really comprehends what literature is, and what the function of literature is, this attitude is simply ludicrous. It is also fatal to the formation of literary taste. People who regard literary taste simply as an accomplishment, and literature simply as a distraction, will never truly succeed either in acquiring the accomplishment or in using it half-acquired as a distraction; though the one is the most perfect of distractions, and though the other is unsurpassed by any other accomplishment in elegance or in power to impress the universal snobbery of civilised mankind. Literature, instead of being an accessory, is the fundamental sine qua non of complete living. I am extremely anxious to avoid rhetorical exaggerations. I do not think I am guilty of one in asserting that he who has not been "presented to the freedom" of literature has not wakened up out of his prenatal sleep. He is merely not born. He can't see; he can't hear; he can't feel, in any full sense. He can only eat his dinner. What more than anything else annoys people who know the true function of literature, and have profited thereby, is the spectacle of so many thousands of individuals going about under the delusion that they are alive, when, as a fact, they are no nearer being alive than a bear in winter.

I will tell you what literature is! No—I only wish I could....