Life on the Mississippi, Part 9. 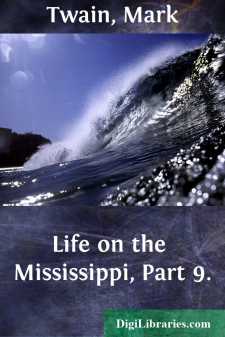 Chapter 41 The Metropolis of the South

THE approaches to New Orleans were familiar; general aspects were unchanged. When one goes flying through London along a railway propped in the air on tall arches, he may inspect miles of upper bedrooms through the open windows, but the lower half of the houses is under his level and out of sight. Similarly, in high-river stage, in the New Orleans region, the water is up to the top of the enclosing levee-rim, the flat country behind it lies low—representing the bottom of a dish—and as the boat swims along, high on the flood, one looks down upon the houses and into the upper windows. There is nothing but that frail breastwork of earth between the people and destruction.

The old brick salt-warehouses clustered at the upper end of the city looked as they had always looked; warehouses which had had a kind of Aladdin's lamp experience, however, since I had seen them; for when the war broke out the proprietor went to bed one night leaving them packed with thousands of sacks of vulgar salt, worth a couple of dollars a sack, and got up in the morning and found his mountain of salt turned into a mountain of gold, so to speak, so suddenly and to so dizzy a height had the war news sent up the price of the article.

The vast reach of plank wharves remained unchanged, and there were as many ships as ever: but the long array of steamboats had vanished; not altogether, of course, but not much of it was left.

The city itself had not changed—to the eye. It had greatly increased in spread and population, but the look of the town was not altered. The dust, waste-paper-littered, was still deep in the streets; the deep, trough-like gutters alongside the curbstones were still half full of reposeful water with a dusty surface; the sidewalks were still—in the sugar and bacon region—encumbered by casks and barrels and hogsheads; the great blocks of austerely plain commercial houses were as dusty-looking as ever.

Canal Street was finer, and more attractive and stirring than formerly, with its drifting crowds of people, its several processions of hurrying street-cars, and—toward evening—its broad second-story verandas crowded with gentlemen and ladies clothed according to the latest mode.

Not that there is any 'architecture' in Canal Street: to speak in broad, general terms, there is no architecture in New Orleans, except in the cemeteries. It seems a strange thing to say of a wealthy, far-seeing, and energetic city of a quarter of a million inhabitants, but it is true. There is a huge granite U.S. Custom-house—costly enough, genuine enough, but as a decoration it is inferior to a gasometer. It looks like a state prison. But it was built before the war. Architecture in America may be said to have been born since the war. New Orleans, I believe, has had the good luck—and in a sense the bad luck—to have had no great fire in late years. It must be so. If the opposite had been the case, I think one would be able to tell the 'burnt district' by the radical improvement in its architecture over the old forms....