Life on the Mississippi, Part 8. 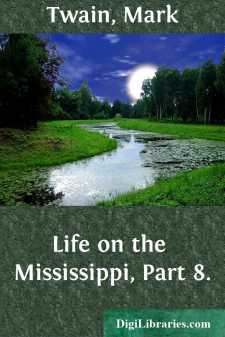 IT was in the early days. I was not a college professor then. I was a humble-minded young land-surveyor, with the world before me—to survey, in case anybody wanted it done. I had a contract to survey a route for a great mining-ditch in California, and I was on my way thither, by sea—a three or four weeks' voyage. There were a good many passengers, but I had very little to say to them; reading and dreaming were my passions, and I avoided conversation in order to indulge these appetites. There were three professional gamblers on board—rough, repulsive fellows. I never had any talk with them, yet I could not help seeing them with some frequency, for they gambled in an upper-deck stateroom every day and night, and in my promenades I often had glimpses of them through their door, which stood a little ajar to let out the surplus tobacco smoke and profanity. They were an evil and hateful presence, but I had to put up with it, of course,

There was one other passenger who fell under my eye a good deal, for he seemed determined to be friendly with me, and I could not have gotten rid of him without running some chance of hurting his feelings, and I was far from wishing to do that. Besides, there was something engaging in his countrified simplicity and his beaming good-nature. The first time I saw this Mr. John Backus, I guessed, from his clothes and his looks, that he was a grazier or farmer from the backwoods of some western State—doubtless Ohio—and afterward when he dropped into his personal history and I discovered that he WAS a cattle-raiser from interior Ohio, I was so pleased with my own penetration that I warmed toward him for verifying my instinct.

He got to dropping alongside me every day, after breakfast, to help me make my promenade; and so, in the course of time, his easy-working jaw had told me everything about his business, his prospects, his family, his relatives, his politics—in fact everything that concerned a Backus, living or dead. And meantime I think he had managed to get out of me everything I knew about my trade, my tribe, my purposes, my prospects, and myself. He was a gentle and persuasive genius, and this thing showed it; for I was not given to talking about my matters. I said something about triangulation, once; the stately word pleased his ear; he inquired what it meant; I explained; after that he quietly and inoffensively ignored my name, and always called me Triangle.

What an enthusiast he was in cattle! At the bare name of a bull or a cow, his eye would light and his eloquent tongue would turn itself loose. As long as I would walk and listen, he would walk and talk; he knew all breeds, he loved all breeds, he caressed them all with his affectionate tongue. I tramped along in voiceless misery whilst the cattle question was up; when I could endure it no longer, I used to deftly insert a scientific topic into the conversation; then my eye fired and his faded; my tongue fluttered, his stopped; life was a joy to me, and a sadness to him....