Life on the Mississippi, Part 7. 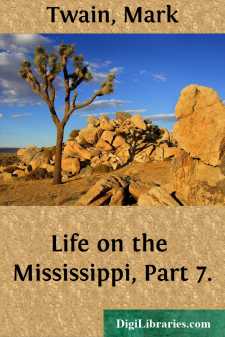 Chapter 31 A Thumb-print and What Came of It

WE were approaching Napoleon, Arkansas. So I began to think about my errand there. Time, noonday; and bright and sunny. This was bad—not best, anyway; for mine was not (preferably) a noonday kind of errand. The more I thought, the more that fact pushed itself upon me—now in one form, now in another. Finally, it took the form of a distinct question: is it good common sense to do the errand in daytime, when, by a little sacrifice of comfort and inclination, you can have night for it, and no inquisitive eyes around. This settled it. Plain question and plain answer make the shortest road out of most perplexities.

I got my friends into my stateroom, and said I was sorry to create annoyance and disappointment, but that upon reflection it really seemed best that we put our luggage ashore and stop over at Napoleon. Their disapproval was prompt and loud; their language mutinous. Their main argument was one which has always been the first to come to the surface, in such cases, since the beginning of time: 'But you decided and AGREED to stick to this boat, etc.; as if, having determined to do an unwise thing, one is thereby bound to go ahead and make TWO unwise things of it, by carrying out that determination.

I tried various mollifying tactics upon them, with reasonably good success: under which encouragement, I increased my efforts; and, to show them that I had not created this annoying errand, and was in no way to blame for it, I presently drifted into its history—substantially as follows:

Toward the end of last year, I spent a few months in Munich, Bavaria. In November I was living in Fraulein Dahlweiner's PENSION, 1a, Karlstrasse; but my working quarters were a mile from there, in the house of a widow who supported herself by taking lodgers. She and her two young children used to drop in every morning and talk German to me—by request. One day, during a ramble about the city, I visited one of the two establishments where the Government keeps and watches corpses until the doctors decide that they are permanently dead, and not in a trance state. It was a grisly place, that spacious room. There were thirty-six corpses of adults in sight, stretched on their backs on slightly slanted boards, in three long rows—all of them with wax-white, rigid faces, and all of them wrapped in white shrouds. Along the sides of the room were deep alcoves, like bay windows; and in each of these lay several marble-visaged babes, utterly hidden and buried under banks of fresh flowers, all but their faces and crossed hands. Around a finger of each of these fifty still forms, both great and small, was a ring; and from the ring a wire led to the ceiling, and thence to a bell in a watch-room yonder, where, day and night, a watchman sits always alert and ready to spring to the aid of any of that pallid company who, waking out of death, shall make a movement—for any, even the slightest, movement will twitch the wire and ring that fearful bell....