Life on the Mississippi, Part 6. 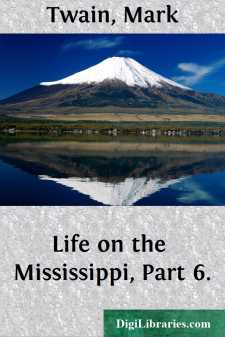 TALK began to run upon the war now, for we were getting down into the upper edge of the former battle-stretch by this time. Columbus was just behind us, so there was a good deal said about the famous battle of Belmont. Several of the boat's officers had seen active service in the Mississippi war-fleet. I gathered that they found themselves sadly out of their element in that kind of business at first, but afterward got accustomed to it, reconciled to it, and more or less at home in it. One of our pilots had his first war experience in the Belmont fight, as a pilot on a boat in the Confederate service. I had often had a curiosity to know how a green hand might feel, in his maiden battle, perched all solitary and alone on high in a pilot house, a target for Tom, Dick and Harry, and nobody at his elbow to shame him from showing the white feather when matters grew hot and perilous around him; so, to me his story was valuable—it filled a gap for me which all histories had left till that time empty.

It was the 7th of November. The fight began at seven in the morning. I was on the 'R. H. W. Hill.' Took over a load of troops from Columbus. Came back, and took over a battery of artillery. My partner said he was going to see the fight; wanted me to go along. I said, no, I wasn't anxious, I would look at it from the pilot-house. He said I was a coward, and left.

That fight was an awful sight. General Cheatham made his men strip their coats off and throw them in a pile, and said, 'Now follow me to hell or victory!' I heard him say that from the pilot-house; and then he galloped in, at the head of his troops. Old General Pillow, with his white hair, mounted on a white horse, sailed in, too, leading his troops as lively as a boy. By and by the Federals chased the rebels back, and here they came! tearing along, everybody for himself and Devil take the hindmost! and down under the bank they scrambled, and took shelter. I was sitting with my legs hanging out of the pilot-house window. All at once I noticed a whizzing sound passing my ear. Judged it was a bullet. I didn't stop to think about anything, I just tilted over backwards and landed on the floor, and staid there. The balls came booming around. Three cannon-balls went through the chimney; one ball took off the corner of the pilot-house; shells were screaming and bursting all around. Mighty warm times—I wished I hadn't come.

I lay there on the pilot-house floor, while the shots came faster and faster. I crept in behind the big stove, in the middle of the pilot-house. Presently a minie-ball came through the stove, and just grazed my head, and cut my hat. I judged it was time to go away from there. The captain was on the roof with a red-headed major from Memphis—a fine-looking man. I heard him say he wanted to leave here, but 'that pilot is killed.' I crept over to the starboard side to pull the bell to set her back; raised up and took a look, and I saw about fifteen shot holes through the window panes; had come so lively I hadn't noticed them....