Life on the Mississippi, Part 5. 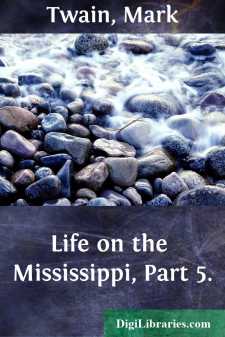 Chapter 21 A Section in My Biography

IN due course I got my license. I was a pilot now, full fledged. I dropped into casual employments; no misfortunes resulting, intermittent work gave place to steady and protracted engagements. Time drifted smoothly and prosperously on, and I supposed—and hoped—that I was going to follow the river the rest of my days, and die at the wheel when my mission was ended. But by and by the war came, commerce was suspended, my occupation was gone.

I had to seek another livelihood. So I became a silver miner in Nevada; next, a newspaper reporter; next, a gold miner, in California; next, a reporter in San Francisco; next, a special correspondent in the Sandwich Islands; next, a roving correspondent in Europe and the East; next, an instructional torch-bearer on the lecture platform; and, finally, I became a scribbler of books, and an immovable fixture among the other rocks of New England.

In so few words have I disposed of the twenty-one slow-drifting years that have come and gone since I last looked from the windows of a pilot-house.

Chapter 22 I Return to My Muttons

AFTER twenty-one years' absence, I felt a very strong desire to see the river again, and the steamboats, and such of the boys as might be left; so I resolved to go out there. I enlisted a poet for company, and a stenographer to 'take him down,' and started westward about the middle of April.

As I proposed to make notes, with a view to printing, I took some thought as to methods of procedure. I reflected that if I were recognized, on the river, I should not be as free to go and come, talk, inquire, and spy around, as I should be if unknown; I remembered that it was the custom of steamboatmen in the old times to load up the confiding stranger with the most picturesque and admirable lies, and put the sophisticated friend off with dull and ineffectual facts: so I concluded, that, from a business point of view, it would be an advantage to disguise our party with fictitious names. The idea was certainly good, but it bred infinite bother; for although Smith, Jones, and Johnson are easy names to remember when there is no occasion to remember them, it is next to impossible to recollect them when they are wanted. How do criminals manage to keep a brand-new ALIAS in mind? This is a great mystery. I was innocent; and yet was seldom able to lay my hand on my new name when it was needed; and it seemed to me that if I had had a crime on my conscience to further confuse me, I could never have kept the name by me at all.

We left per Pennsylvania Railroad, at 8 A.M. April 18.

'EVENING. Speaking of dress. Grace and picturesqueness drop gradually out of it as one travels away from New York.'

I find that among my notes. It makes no difference which direction you take, the fact remains the same. Whether you move north, south, east, or west, no matter: you can get up in the morning and guess how far you have come, by noting what degree of grace and picturesqueness is by that time lacking in the costumes of the new passengers,—I do not mean of the women alone, but of both sexes....