Life on the Mississippi, Part 4. 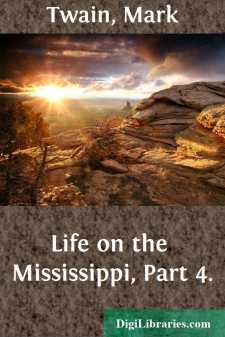 IT was always the custom for the boats to leave New Orleans between four and five o'clock in the afternoon. From three o'clock onward they would be burning rosin and pitch pine (the sign of preparation), and so one had the picturesque spectacle of a rank, some two or three miles long, of tall, ascending columns of coal-black smoke; a colonnade which supported a sable roof of the same smoke blended together and spreading abroad over the city. Every outward-bound boat had its flag flying at the jack-staff, and sometimes a duplicate on the verge staff astern. Two or three miles of mates were commanding and swearing with more than usual emphasis; countless processions of freight barrels and boxes were spinning athwart the levee and flying aboard the stage-planks, belated passengers were dodging and skipping among these frantic things, hoping to reach the forecastle companion way alive, but having their doubts about it; women with reticules and bandboxes were trying to keep up with husbands freighted with carpet-sacks and crying babies, and making a failure of it by losing their heads in the whirl and roar and general distraction; drays and baggage-vans were clattering hither and thither in a wild hurry, every now and then getting blocked and jammed together, and then during ten seconds one could not see them for the profanity, except vaguely and dimly; every windlass connected with every forehatch, from one end of that long array of steamboats to the other, was keeping up a deafening whiz and whir, lowering freight into the hold, and the half-naked crews of perspiring negroes that worked them were roaring such songs as 'De Las' Sack! De Las' Sack!'—inspired to unimaginable exaltation by the chaos of turmoil and racket that was driving everybody else mad.

By this time the hurricane and boiler decks of the steamers would be packed and black with passengers. The 'last bells' would begin to clang, all down the line, and then the powwow seemed to double; in a moment or two the final warning came,—a simultaneous din of Chinese gongs, with the cry, 'All dat ain't goin', please to git asho'!'—and behold, the powwow quadrupled! People came swarming ashore, overturning excited stragglers that were trying to swarm aboard. One more moment later a long array of stage-planks was being hauled in, each with its customary latest passenger clinging to the end of it with teeth, nails, and everything else, and the customary latest procrastinator making a wild spring shoreward over his head.

Now a number of the boats slide backward into the stream, leaving wide gaps in the serried rank of steamers. Citizens crowd the decks of boats that are not to go, in order to see the sight. Steamer after steamer straightens herself up, gathers all her strength, and presently comes swinging by, under a tremendous head of steam, with flag flying, black smoke rolling, and her entire crew of firemen and deck-hands (usually swarthy negroes) massed together on the forecastle, the best 'voice' in the lot towering from the midst (being mounted on the capstan), waving his hat or a flag, and all roaring a mighty chorus, while the parting cannons boom and the multitudinous spectators swing their hats and huzza!...