Life on the Mississippi, Part 3. 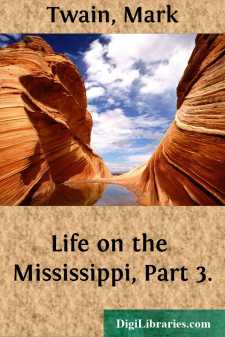 DURING this big rise these small-fry craft were an intolerable nuisance. We were running chute after chute,—a new world to me,—and if there was a particularly cramped place in a chute, we would be pretty sure to meet a broad-horn there; and if he failed to be there, we would find him in a still worse locality, namely, the head of the chute, on the shoal water. And then there would be no end of profane cordialities exchanged.

Sometimes, in the big river, when we would be feeling our way cautiously along through a fog, the deep hush would suddenly be broken by yells and a clamor of tin pans, and all in instant a log raft would appear vaguely through the webby veil, close upon us; and then we did not wait to swap knives, but snatched our engine bells out by the roots and piled on all the steam we had, to scramble out of the way! One doesn't hit a rock or a solid log craft with a steamboat when he can get excused.

You will hardly believe it, but many steamboat clerks always carried a large assortment of religious tracts with them in those old departed steamboating days. Indeed they did. Twenty times a day we would be cramping up around a bar, while a string of these small-fry rascals were drifting down into the head of the bend away above and beyond us a couple of miles. Now a skiff would dart away from one of them, and come fighting its laborious way across the desert of water. It would 'ease all,' in the shadow of our forecastle, and the panting oarsmen would shout, 'Gimme a pa-a-per!' as the skiff drifted swiftly astern. The clerk would throw over a file of New Orleans journals. If these were picked up without comment, you might notice that now a dozen other skiffs had been drifting down upon us without saying anything. You understand, they had been waiting to see how No. 1 was going to fare. No. 1 making no comment, all the rest would bend to their oars and come on, now; and as fast as they came the clerk would heave over neat bundles of religious tracts, tied to shingles. The amount of hard swearing which twelve packages of religious literature will command when impartially divided up among twelve raftsmen's crews, who have pulled a heavy skiff two miles on a hot day to get them, is simply incredible.

As I have said, the big rise brought a new world under my vision. By the time the river was over its banks we had forsaken our old paths and were hourly climbing over bars that had stood ten feet out of water before; we were shaving stumpy shores, like that at the foot of Madrid Bend, which I had always seen avoided before; we were clattering through chutes like that of 82, where the opening at the foot was an unbroken wall of timber till our nose was almost at the very spot. Some of these chutes were utter solitudes. The dense, untouched forest overhung both banks of the crooked little crack, and one could believe that human creatures had never intruded there before. The swinging grape-vines, the grassy nooks and vistas glimpsed as we swept by, the flowering creepers waving their red blossoms from the tops of dead trunks, and all the spendthrift richness of the forest foliage, were wasted and thrown away there....