Life on the Mississippi, Part 2. 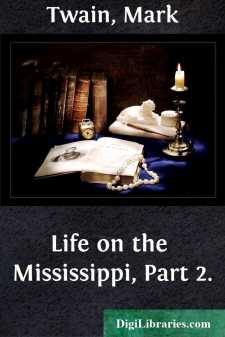 WHAT with lying on the rocks four days at Louisville, and some other delays, the poor old 'Paul Jones' fooled away about two weeks in making the voyage from Cincinnati to New Orleans. This gave me a chance to get acquainted with one of the pilots, and he taught me how to steer the boat, and thus made the fascination of river life more potent than ever for me.

It also gave me a chance to get acquainted with a youth who had taken deck passage—more's the pity; for he easily borrowed six dollars of me on a promise to return to the boat and pay it back to me the day after we should arrive. But he probably died or forgot, for he never came. It was doubtless the former, since he had said his parents were wealthy, and he only traveled deck passage because it was cooler.{footnote [1. 'Deck' Passage, i.e. steerage passage.]}

I soon discovered two things. One was that a vessel would not be likely to sail for the mouth of the Amazon under ten or twelve years; and the other was that the nine or ten dollars still left in my pocket would not suffice for so imposing an exploration as I had planned, even if I could afford to wait for a ship. Therefore it followed that I must contrive a new career. The 'Paul Jones' was now bound for St. Louis. I planned a siege against my pilot, and at the end of three hard days he surrendered. He agreed to teach me the Mississippi River from New Orleans to St. Louis for five hundred dollars, payable out of the first wages I should receive after graduating. I entered upon the small enterprise of 'learning' twelve or thirteen hundred miles of the great Mississippi River with the easy confidence of my time of life. If I had really known what I was about to require of my faculties, I should not have had the courage to begin. I supposed that all a pilot had to do was to keep his boat in the river, and I did not consider that that could be much of a trick, since it was so wide.

The boat backed out from New Orleans at four in the afternoon, and it was 'our watch' until eight. Mr. Bixby, my chief, 'straightened her up,' plowed her along past the sterns of the other boats that lay at the Levee, and then said, 'Here, take her; shave those steamships as close as you'd peel an apple.' I took the wheel, and my heart-beat fluttered up into the hundreds; for it seemed to me that we were about to scrape the side off every ship in the line, we were so close. I held my breath and began to claw the boat away from the danger; and I had my own opinion of the pilot who had known no better than to get us into such peril, but I was too wise to express it. In half a minute I had a wide margin of safety intervening between the 'Paul Jones' and the ships; and within ten seconds more I was set aside in disgrace, and Mr. Bixby was going into danger again and flaying me alive with abuse of my cowardice. I was stung, but I was obliged to admire the easy confidence with which my chief loafed from side to side of his wheel, and trimmed the ships so closely that disaster seemed ceaselessly imminent....