Life on the Mississippi, Part 12. 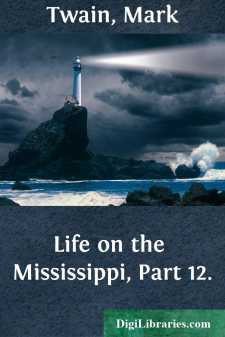 A Question of Law

THE slaughter-house is gone from the mouth of Bear Creek and so is the small jail (or 'calaboose') which once stood in its neighborhood. A citizen asked, 'Do you remember when Jimmy Finn, the town drunkard, was burned to death in the calaboose?'

Observe, now, how history becomes defiled, through lapse of time and the help of the bad memories of men. Jimmy Finn was not burned in the calaboose, but died a natural death in a tan vat, of a combination of delirium tremens and spontaneous combustion. When I say natural death, I mean it was a natural death for Jimmy Finn to die. The calaboose victim was not a citizen; he was a poor stranger, a harmless whiskey-sodden tramp. I know more about his case than anybody else; I knew too much of it, in that bygone day, to relish speaking of it. That tramp was wandering about the streets one chilly evening, with a pipe in his mouth, and begging for a match; he got neither matches nor courtesy; on the contrary, a troop of bad little boys followed him around and amused themselves with nagging and annoying him. I assisted; but at last, some appeal which the wayfarer made for forbearance, accompanying it with a pathetic reference to his forlorn and friendless condition, touched such sense of shame and remnant of right feeling as were left in me, and I went away and got him some matches, and then hied me home and to bed, heavily weighted as to conscience, and unbuoyant in spirit. An hour or two afterward, the man was arrested and locked up in the calaboose by the marshal—large name for a constable, but that was his title. At two in the morning, the church bells rang for fire, and everybody turned out, of course—I with the rest. The tramp had used his matches disastrously: he had set his straw bed on fire, and the oaken sheathing of the room had caught. When I reached the ground, two hundred men, women, and children stood massed together, transfixed with horror, and staring at the grated windows of the jail. Behind the iron bars, and tugging frantically at them, and screaming for help, stood the tramp; he seemed like a black object set against a sun, so white and intense was the light at his back. That marshal could not be found, and he had the only key. A battering-ram was quickly improvised, and the thunder of its blows upon the door had so encouraging a sound that the spectators broke into wild cheering, and believed the merciful battle won. But it was not so. The timbers were too strong; they did not yield. It was said that the man's death-grip still held fast to the bars after he was dead; and that in this position the fires wrapped him about and consumed him. As to this, I do not know. What was seen after I recognized the face that was pleading through the bars was seen by others, not by me.

I saw that face, so situated, every night for a long time afterward; and I believed myself as guilty of the man's death as if I had given him the matches purposely that he might burn himself up with them. I had not a doubt that I should be hanged if my connection with this tragedy were found out....