Life on the Mississippi, Part 11. 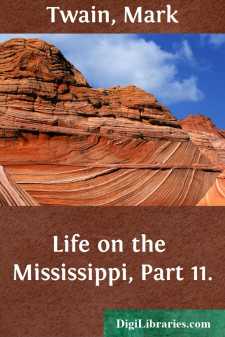 WE left for St. Louis in the 'City of Baton Rouge,' on a delightfully hot day, but with the main purpose of my visit but lamely accomplished. I had hoped to hunt up and talk with a hundred steamboatmen, but got so pleasantly involved in the social life of the town that I got nothing more than mere five-minute talks with a couple of dozen of the craft.

I was on the bench of the pilot-house when we backed out and 'straightened up' for the start—the boat pausing for a 'good ready,' in the old-fashioned way, and the black smoke piling out of the chimneys equally in the old-fashioned way. Then we began to gather momentum, and presently were fairly under way and booming along. It was all as natural and familiar—and so were the shoreward sights—as if there had been no break in my river life. There was a 'cub,' and I judged that he would take the wheel now; and he did. Captain Bixby stepped into the pilot-house. Presently the cub closed up on the rank of steamships. He made me nervous, for he allowed too much water to show between our boat and the ships. I knew quite well what was going to happen, because I could date back in my own life and inspect the record. The captain looked on, during a silent half-minute, then took the wheel himself, and crowded the boat in, till she went scraping along within a hand-breadth of the ships. It was exactly the favor which he had done me, about a quarter of a century before, in that same spot, the first time I ever steamed out of the port of New Orleans. It was a very great and sincere pleasure to me to see the thing repeated—with somebody else as victim.

We made Natchez (three hundred miles) in twenty-two hours and a half— much the swiftest passage I have ever made over that piece of water.

The next morning I came on with the four o'clock watch, and saw Ritchie successfully run half a dozen crossings in a fog, using for his guidance the marked chart devised and patented by Bixby and himself. This sufficiently evidenced the great value of the chart.

By and by, when the fog began to clear off, I noticed that the reflection of a tree in the smooth water of an overflowed bank, six hundred yards away, was stronger and blacker than the ghostly tree itself. The faint spectral trees, dimly glimpsed through the shredding fog, were very pretty things to see.

We had a heavy thunder-storm at Natchez, another at Vicksburg, and still another about fifty miles below Memphis. They had an old-fashioned energy which had long been unfamiliar to me. This third storm was accompanied by a raging wind. We tied up to the bank when we saw the tempest coming, and everybody left the pilot-house but me. The wind bent the young trees down, exposing the pale underside of the leaves; and gust after gust followed, in quick succession, thrashing the branches violently up and down, and to this side and that, and creating swift waves of alternating green and white according to the side of the leaf that was exposed, and these waves raced after each other as do their kind over a wind-tossed field of oats....