Life on the Mississippi, Part 10. 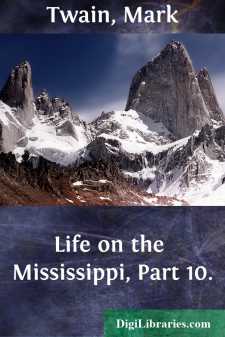 THE largest annual event in New Orleans is a something which we arrived too late to sample—the Mardi-Gras festivities. I saw the procession of the Mystic Crew of Comus there, twenty-four years ago—with knights and nobles and so on, clothed in silken and golden Paris-made gorgeousnesses, planned and bought for that single night's use; and in their train all manner of giants, dwarfs, monstrosities, and other diverting grotesquerie—a startling and wonderful sort of show, as it filed solemnly and silently down the street in the light of its smoking and flickering torches; but it is said that in these latter days the spectacle is mightily augmented, as to cost, splendor, and variety. There is a chief personage—'Rex;' and if I remember rightly, neither this king nor any of his great following of subordinates is known to any outsider. All these people are gentlemen of position and consequence; and it is a proud thing to belong to the organization; so the mystery in which they hide their personality is merely for romance's sake, and not on account of the police.

Mardi-Gras is of course a relic of the French and Spanish occupation; but I judge that the religious feature has been pretty well knocked out of it now. Sir Walter has got the advantage of the gentlemen of the cowl and rosary, and he will stay. His medieval business, supplemented by the monsters and the oddities, and the pleasant creatures from fairy-land, is finer to look at than the poor fantastic inventions and performances of the reveling rabble of the priest's day, and serves quite as well, perhaps, to emphasize the day and admonish men that the grace-line between the worldly season and the holy one is reached.

This Mardi-Gras pageant was the exclusive possession of New Orleans until recently. But now it has spread to Memphis and St. Louis and Baltimore. It has probably reached its limit. It is a thing which could hardly exist in the practical North; would certainly last but a very brief time; as brief a time as it would last in London. For the soul of it is the romantic, not the funny and the grotesque. Take away the romantic mysteries, the kings and knights and big-sounding titles, and Mardi-Gras would die, down there in the South. The very feature that keeps it alive in the South—girly-girly romance—would kill it in the North or in London. Puck and Punch, and the press universal, would fall upon it and make merciless fun of it, and its first exhibition would be also its last.

Against the crimes of the French Revolution and of Bonaparte may be set two compensating benefactions: the Revolution broke the chains of the ANCIEN REGIME and of the Church, and made of a nation of abject slaves a nation of freemen; and Bonaparte instituted the setting of merit above birth, and also so completely stripped the divinity from royalty, that whereas crowned heads in Europe were gods before, they are only men, since, and can never be gods again, but only figureheads, and answerable for their acts like common clay....