Life on the Mississippi, Part 1. 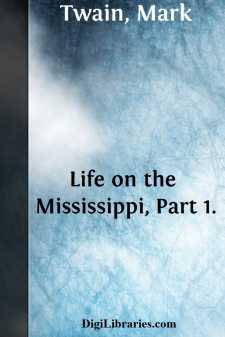 THE Mississippi is well worth reading about. It is not a commonplace river, but on the contrary is in all ways remarkable. Considering the Missouri its main branch, it is the longest river in the world—four thousand three hundred miles. It seems safe to say that it is also the crookedest river in the world, since in one part of its journey it uses up one thousand three hundred miles to cover the same ground that the crow would fly over in six hundred and seventy-five. It discharges three times as much water as the St. Lawrence, twenty-five times as much as the Rhine, and three hundred and thirty-eight times as much as the Thames. No other river has so vast a drainage-basin: it draws its water supply from twenty-eight States and Territories; from Delaware, on the Atlantic seaboard, and from all the country between that and Idaho on the Pacific slope—a spread of forty-five degrees of longitude. The Mississippi receives and carries to the Gulf water from fifty-four subordinate rivers that are navigable by steamboats, and from some hundreds that are navigable by flats and keels. The area of its drainage-basin is as great as the combined areas of England, Wales, Scotland, Ireland, France, Spain, Portugal, Germany, Austria, Italy, and Turkey; and almost all this wide region is fertile; the Mississippi valley, proper, is exceptionally so.

It is a remarkable river in this: that instead of widening toward its mouth, it grows narrower; grows narrower and deeper. From the junction of the Ohio to a point half way down to the sea, the width averages a mile in high water: thence to the sea the width steadily diminishes, until, at the 'Passes,' above the mouth, it is but little over half a mile. At the junction of the Ohio the Mississippi's depth is eighty-seven feet; the depth increases gradually, reaching one hundred and twenty-nine just above the mouth.

The difference in rise and fall is also remarkable—not in the upper, but in the lower river. The rise is tolerably uniform down to Natchez (three hundred and sixty miles above the mouth)—about fifty feet. But at Bayou La Fourche the river rises only twenty-four feet; at New Orleans only fifteen, and just above the mouth only two and one half.

An article in the New Orleans 'Times-Democrat,' based upon reports of able engineers, states that the river annually empties four hundred and six million tons of mud into the Gulf of Mexico—which brings to mind Captain Marryat's rude name for the Mississippi—'the Great Sewer.' This mud, solidified, would make a mass a mile square and two hundred and forty-one feet high.

The mud deposit gradually extends the land—but only gradually; it has extended it not quite a third of a mile in the two hundred years which have elapsed since the river took its place in history. The belief of the scientific people is, that the mouth used to be at Baton Rouge, where the hills cease, and that the two hundred miles of land between there and the Gulf was built by the river. This gives us the age of that piece of country, without any trouble at all—one hundred and twenty thousand years. Yet it is much the youthfullest batch of country that lies around there anywhere.

The Mississippi is remarkable in still another way—its disposition to make prodigious jumps by cutting through narrow necks of land, and thus straightening and shortening itself. More than once it has shortened itself thirty miles at a single jump! These cut-offs have had curious effects: they have thrown several river towns out into the rural districts, and built up sand bars and forests in front of them. The town of Delta used to be three miles below Vicksburg: a recent cutoff has radically changed the position, and Delta is now TWO MILES ABOVE Vicksburg.

Both of these river towns have been retired to the country by that cut-off. A cut-off plays havoc with boundary lines and jurisdictions: for instance, a man is living in the State of Mississippi to-day, a cut-off occurs to-night, and to-morrow the man finds himself and his land over on the other side of the river, within the boundaries and subject to the laws of the State of Louisiana! Such a thing, happening in the upper river in the old times, could have transferred a slave from Missouri to Illinois and made a free man of him.

The Mississippi does not alter its locality by cut-offs alone: it is always changing its habitat BODILY—is always moving bodily SIDEWISE....