Life of Lord Byron, Vol. 6 With His Letters and Journals 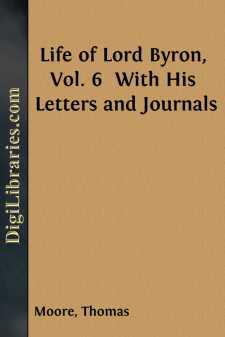 "I must again refer you to those two letters addressed to you at Passy before I read your speech in Galignani, &amp;c., and which you do not seem to have received.[1]

[Footnote 1: I was never lucky enough to recover these two letters, though frequent enquiries were made about them at the French post-office.]

"Of Hunt I see little—once a month or so, and then on his own business, generally. You may easily suppose that I know too little of Hampstead and his satellites to have much communion or community with him. My whole present relation to him arose from Shelley's unexpected wreck. You would not have had me leave him in the street with his family, would you? and as to the other plan you mention, you forget how it would humiliate him—that his writings should be supposed to be dead weight![1] Think a moment—he is perhaps the vainest man on earth, at least his own friends say so pretty loudly; and if he were in other circumstances, I might be tempted to take him down a peg; but not now,—it would be cruel. It is a cursed business; but neither the motive nor the means rest upon my conscience, and it happens that he and his brother have been so far benefited by the publication in a pecuniary point of view. His brother is a steady, bold fellow, such as Prynne, for example, and full of moral, and, I hear, physical courage.

[Footnote 1: The passage in one of my letters to which he here refers shall be given presently.]

"And you are really recanting, or softening to the clergy! It will do little good for you—it is you, not the poem, they are at. They will say they frightened you—forbid it, Ireland!

Lord Byron had now, for some time, as may be collected from his letters, begun to fancy that his reputation in England was on the wane. The same thirst after fame, with the same sensitiveness to every passing change of popular favour, which led Tasso at last to look upon himself as the most despised of writers[1], had more than once disposed Lord Byron, in the midst of all his triumphs, if not to doubt their reality, at least to distrust their continuance; and sometimes even, with that painful skill which sensibility supplies, to extract out of the brightest tributes of success some omen of future failure, or symptom of decline. New successes, however, still came to dissipate these bodings of diffidence; nor was it till after his unlucky coalition with Mr. Hunt in the Liberal, that any grounds for such a suspicion of his having declined in public favour showed themselves.

The chief inducements, on the part of Lord Byron, to this unworthy alliance were, in the first place, a wish to second the kind views of his friend Shelley in inviting Mr....