Life of Lord Byron, Vol. 4 With His Letters and Journals 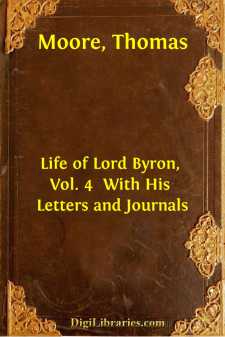 "Your letters of the 18th and 20th are arrived. In my own I have given you the rise, progress, decline, and fall, of my recent malady. It is gone to the devil: I won't pay him so bad a compliment as to say it came from him;—he is too much of a gentleman. It was nothing but a slow fever, which quickened its pace towards the end of its journey. I had been bored with it some weeks—with nocturnal burnings and morning perspirations; but I am quite well again, which I attribute to having had neither medicine nor doctor thereof.

"In a few days I set off for Rome: such is my purpose. I shall change it very often before Monday next, but do you continue to direct and address to Venice, as heretofore. If I go, letters will be forwarded: I say 'if,' because I never know what I shall do till it is done; and as I mean most firmly to set out for Rome, it is not unlikely I may find myself at St. Petersburg.

"You tell me to 'take care of myself;'—faith, and I will. I won't be posthumous yet, if I can help it. Notwithstanding, only think what a 'Life and Adventures,' while I am in full scandal, would be worth, together with the 'membra' of my writing-desk, the sixteen beginnings of poems never to be finished! Do you think I would not have shot myself last year, had I not luckily recollected that Mrs. C * * and Lady N * *, and all the old women in England would have been delighted;—besides the agreeable 'Lunacy,' of the 'Crowner's Quest,' and the regrets of two or three or half a dozen? Be assured that I would live for two reasons, or more;—there are one or two people whom I have to put out of the world, and as many into it, before I can 'depart in peace;' if I do so before, I have not fulfilled my mission. Besides, when I turn thirty, I will turn devout; I feel a great vocation that way in Catholic churches, and when I hear the organ.

"So * * is writing again! Is there no Bedlam in Scotland? nor thumb-screw? nor gag? nor hand-cuff? I went upon my knees to him almost, some years ago, to prevent him from publishing a political pamphlet, which would have given him a livelier idea of 'Habeas Corpus' than the world will derive from his present production upon that suspended subject, which will doubtless be followed by the suspension of other of his Majesty's subjects.

"I condole with Drury Lane and rejoice with * *,—that is, in a modest way,—on the tragical end of the new tragedy.

"You and Leigh Hunt have quarrelled then, it seems? I introduce him and his poem to you, in the hope that (malgré politics) the union would be beneficial to both, and the end is eternal enmity; and yet I did this with the best intentions: I introduce * * *, and * * * runs away with your money: my friend Hobhouse quarrels, too, with the Quarterly: and (except the last) I am the innocent Istmhus (damn the word! I can't spell it, though I have crossed that of Corinth a dozen times) of these enmities.

"I will tell you something about Chillon.—A Mr. De Luc, ninety years old, a Swiss, had it read to him, and is pleased with it,—so my sister writes....