Life of Lord Byron, Vol. 3 With His Letters and Journals 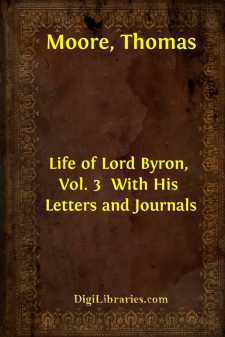 "Better than a month since I last journalised:—most of it out of London and at Notts., but a busy one and a pleasant, at least three weeks of it. On my return, I find all the newspapers in hysterics, and town in an uproar, on the avowal and republication of two stanzas on Princess Charlotte's weeping at Regency's speech to Lauderdale in 1812. They are daily at it still;—some of the abuse good, all of it hearty. They talk of a motion in our House upon it—be it so.

"Got up—redde the Morning Post, containing the battle of Buonaparte, the destruction of the Custom-house, and a paragraph on me as long as my pedigree, and vituperative, as usual.

"Hobhouse is returned to England. He is my best friend, the most lively, and a man of the most sterling talents extant.

"'The Corsair' has been conceived, written, published, &c. since I last took up this journal. They tell me it has great success;—it was written con amore, and much from existence. Murray is satisfied with its progress; and if the public are equally so with the perusal, there's an end of the matter.

"Been to Hanson's on business. Saw Rogers, and had a note from Lady Melbourne, who says, it is said I am 'much out of spirits.' I wonder if I really am or not? I have certainly enough of 'that perilous stuff which weighs upon the heart,' and it is better they should believe it to be the result of these attacks than of the real cause; but—ay, ay, always but, to the end of the chapter.

"Hobhouse has told me ten thousand anecdotes of Napoleon, all good and true. My friend H. is the most entertaining of companions, and a fine fellow to boot.

"Redde a little—wrote notes and letters, and am alone, which Locke says, is bad company. 'Be not solitary, be not idle.'—Um!—the idleness is troublesome; but I can't see so much to regret in the solitude. The more I see of men, the less I like them. If I could but say so of women too, all would be well. Why can't I? I am now six-and-twenty; my passions have had enough to cool them; my affections more than enough to wither them,—and yet—and yet—always yet and but—'Excellent well, you are a fishmonger—get thee to a nunnery.'—'They fool me to the top of my bent.'

"Began a letter, which I threw into the fire. Redde—but to little purpose. Did not visit Hobhouse, as I promised and ought. No matter, the loss is mine. Smoked cigars.

"Napoleon!—this week will decide his fate. All seems against him; but I believe and hope he will win—at least, beat back the invaders. What right have we to prescribe sovereigns to France? Oh for a Republic! 'Brutus, thou sleepest.' Hobhouse abounds in continental anecdotes of this extraordinary man; all in favour of his intellect and courage, but against his bonhommie. No wonder;—how should he, who knows mankind well, do other than despise and abhor them?

"The greater the equality, the more impartially evil is distributed, and becomes lighter by the division among so many—therefore, a Republic...!