Life of Lord Byron, Vol. 2 With His Letters and Journals 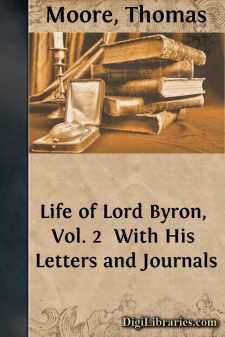 NOTICES OF THE LIFE OF LORD BYRON.

Having landed the young pilgrim once more in England, it may be worth while, before we accompany him into the scenes that awaited him at home, to consider how far the general character of his mind and disposition may have been affected by the course of travel and adventure, in which he had been, for the last two years, engaged. A life less savouring of poetry and romance than that which he had pursued previously to his departure on his travels, it would be difficult to imagine. In his childhood, it is true, he had been a dweller and wanderer among scenes well calculated, according to the ordinary notion, to implant the first rudiments of poetic feeling. But, though the poet may afterwards feed on the recollection of such scenes, it is more than questionable, as has been already observed, whether he ever has been formed by them. If a childhood, indeed, passed among mountainous scenery were so favourable to the awakening of the imaginative power, both the Welsh, among ourselves, and the Swiss, abroad, ought to rank much higher on the scale of poetic excellence than they do at present. But, even allowing the picturesqueness of his early haunts to have had some share in giving a direction to the fancy of Byron, the actual operation of this influence, whatever it may have been, ceased with his childhood; and the life which he led afterwards during his school-days at Harrow, was,—as naturally the life of so idle and daring a schoolboy must be,—the very reverse of poetical. For a soldier or an adventurer, the course of training through which he then passed would have been perfect;—his athletic sports, his battles, his love of dangerous enterprise, gave every promise of a spirit fit for the most stormy career. But to the meditative pursuits of poesy, these dispositions seemed, of all others, the least friendly; and, however they might promise to render him, at some future time, a subject for bards, gave, assuredly, but little hope of his shining first among bards himself.

The habits of his life at the university were even still less intellectual and literary. While a schoolboy, he had read abundantly and eagerly, though desultorily; but even this discipline of his mind, irregular and undirected as it was, he had, in a great measure, given up, after leaving Harrow; and among the pursuits that occupied his academic hours, those of playing at hazard, sparring, and keeping a bear and bull-dogs, were, if not the most favourite, at least, perhaps, the most innocent. His time in London passed equally unmarked either by mental cultivation or refined amusement. Having no resources in private society, from his total want of friends and connections, he was left to live loosely about town among the loungers in coffee-houses; and to those who remember what his two favourite haunts, Limmer's and Stevens's, were at that period, it is needless to say that, whatever else may have been the merits of these establishments, they were anything but fit schools for the formation of poetic character....