Life of Lord Byron, Vol. 1 With His Letters and Journals 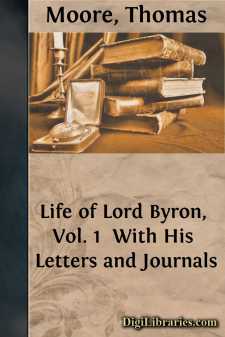 NOTICES OF THE LIFE OF LORD BYRON.

It has been said of Lord Byron, "that he was prouder of being a descendant of those Byrons of Normandy, who accompanied William the Conqueror into England, than of having been the author of Childe Harold and Manfred." This remark is not altogether unfounded in truth. In the character of the noble poet, the pride of ancestry was undoubtedly one of the most decided features; and, as far as antiquity alone gives lustre to descent, he had every reason to boast of the claims of his race. In Doomsday-book, the name of Ralph de Burun ranks high among the tenants of land in Nottinghamshire; and in the succeeding reigns, under the title of Lords of Horestan Castle, we find his descendants holding considerable possessions in Derbyshire; to which, afterwards, in the time of Edward I., were added the lands of Rochdale in Lancashire. So extensive, indeed, in those early times, was the landed wealth of the family, that the partition of their property, in Nottinghamshire alone, has been sufficient to establish some of the first families of the county.

Its antiquity, however, was not the only distinction by which the name of Byron came recommended to its inheritor; those personal merits and accomplishments, which form the best ornament of a genealogy, seem to have been displayed in no ordinary degree by some of his ancestors. In one of his own early poems, alluding to the achievements of his race, he commemorates, with much satisfaction, those "mail-covered barons" among them,

who proudly to battleLed their vassals from Europe to Palestine's plain.

Near Askalon's towers John of Horiston slumbers,Unnerved is the hand of his minstrel by death.

As there is no record, however, as far as I can discover, of any of his ancestors having been engaged in the Holy Wars, it is possible that he may have had no other authority for this notion than the tradition which he found connected with certain strange groups of heads, which are represented on the old panel-work, in some of the chambers at Newstead. In one of these groups, consisting of three heads, strongly carved and projecting from the panel, the centre figure evidently represents a Saracen or Moor, with an European female on one side of him, and a Christian soldier on the other. In a second group, which is in one of the bed-rooms, the female occupies the centre, while on each side is the head of a Saracen, with the eyes fixed earnestly upon her. Of the exact meaning of these figures there is nothing certain known; but the tradition is, I understand, that they refer to some love-adventure, in which one of those crusaders, of whom the young poet speaks, was engaged.

Of the more certain, or, at least, better known exploits of the family, it is sufficient, perhaps, to say, that, at the siege of Calais under Edward III., and on the fields, memorable in their respective eras, of Cressy, Bosworth, and Marston Moor, the name of the Byrons reaped honours both of rank and fame, of which their young descendant has, in the verses just cited, shown himself proudly conscious....