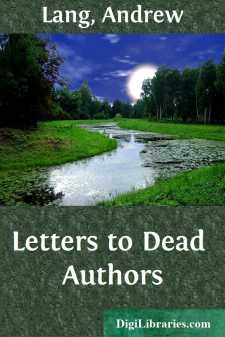 Sir,—There are many things that stand in the way of the critic when he has a mind to praise the living. He may dread the charge of writing rather to vex a rival than to exalt the subject of his applause. He shuns the appearance of seeking the favour of the famous, and would not willingly be regarded as one of the many parasites who now advertise each movement and action of contemporary genius. 'Such and such men of letters are passing their summer holidays in the Val d'Aosta,' or the Mountains of the Moon, or the Suliman Range, as it may happen. So reports our literary 'Court Circular,' and all our Précieuses read the tidings with enthusiasm. Lastly, if the critic be quite new to the world of letters, he may superfluously fear to vex a poet or a novelist by the abundance of his eulogy. No such doubts perplex us when, with all our hearts, we would commend the departed; for they have passed almost beyond the reach even of envy; and to those pale cheeks of theirs no commendation can bring the red.

You, above all others, were and remain without a rival in your many-sided excellence, and praise of you strikes at none of those who have survived your day. The increase of time only mellows your renown, and each year that passes and brings you no successor does but sharpen the keenness of our sense of loss. In what other novelist, since Scott was worn down by the burden of a forlorn endeavour, and died for honour's sake, has the world found so many of the fairest gifts combined? If we may not call you a poet (for the first of English writers of light verse did not seek that crown), who that was less than a poet ever saw life with a glance so keen as yours, so steady, and so sane? Your pathos was never cheap, your laughter never forced; your sigh was never the pulpit trick of the preacher. Your funny people—your Costigans and Fokers—were not mere characters of trick and catch-word, were not empty comic masks. Behind each the human heart was beating; and ever and again we were allowed to see the features of the man.

Thus fiction in your hands was not simply a profession, like another, but a constant reflection of the whole surface of life: a repeated echo of its laughter and its complaint. Others have written, and not written badly, with the stolid professional regularity of the clerk at his desk; you, like the Scholar Gipsy, might have said that 'it needs heaven-sent moments for this skill.' There are, it will not surprise you, some honourable women and a few men who call you a cynic; who speak of 'the withered world of Thackerayan satire;' who think your eyes were ever turned to the sordid aspects of life—to the mother-in-law who threatens to 'take away her silver bread-basket;' to the intriguer, the sneak, the termagant; to the Beckys, and Barnes Newcomes, and Mrs. Mackenzies of this world. The quarrel of these sentimentalists is really with life, not with you; they might as wisely blame Monsieur Buffon because there are snakes in his Natural History....