Lectures on Language As Particularly Connected with English Grammar. 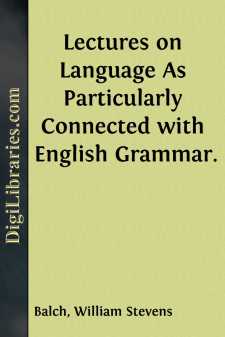 LECTURE I. GENERAL VIEW OF LANGUAGE.

It is proposed to commence, this evening, a course of Lectures on the Grammar of the English Language. I am aware of the difficulties attending this subject, occasioned not so much by any fault in itself, as by the thousand and one methods adopted to teach it, the multiplicity of books pretending to "simplify" it, and the vast contrariety of opinion entertained by those who profess to be its masters. By many it has been considered a needless affair, an unnecessary appendage to a common education; by others, altogether beyond the reach of common capacities; and by all, cold, lifeless, and uninteresting, full of doubts and perplexities, where the wisest have differed, and the firmest often changed opinions.

All this difficulty originates, I apprehend, in the wrong view that is taken of the subject. The most beautiful landscape may appear at great disadvantage, if viewed from an unfavorable position. I would be slow to believe that the means on which depends the whole business of the community, the study of the sciences, all improvement upon the past, the history of all nations in all ages of the world, social intercourse, oral or written, and, in a great measure, the knowledge of God, and the hopes of immortality, can be either unworthy of study, or, if rightly explained, uninteresting in the acquisition. In fact, on the principles I am about to advocate, I have seen the deepest interest manifested, from the small child to the grey-headed sire, from the mere novice to the statesman and philosopher, and all alike seemed to be edified and improved by the attention bestowed upon the subject.

I confess, however, that with the mention of grammar, an association of ideas are called up by no means agreeable. The mind involuntarily reverts to the days of childhood, when we were compelled, at the risk of our bodily safety, to commit to memory a set of arbitrary rules, which we could neither understand nor apply in the correct use of language. Formerly it was never dreamed that grammar depended on any higher authority than the books put into our hands. And learners were not only dissuaded, but strictly forbidden to go beyond the limits set them in the etymological and syntactical rules of the authors to whom they were referred. If a query ever arose in their minds, and they modestly proposed a plain question as to the why and wherefore things were thus, instead of giving an answer according to common sense, in a way to be understood, the authorities were pondered over, till some rule or remark could be found which would apply, and this settled the matter with "proof as strong as holy writ." In this way an end may be put to the inquiry; but the thinking mind will hardly be satisfied with the mere opinion of another, who has no evidence to afford, save the undisputed dignity of his station, or the authority of books. This course is easily accounted for. Rather than expose his own ignorance, the teacher quotes the printed ignorance of others, thinking, no doubt, that folly and nonsense will appear better second-handed, than fresh from his own responsibility. Or else on the more common score, that "misery loves company."

Teachers have not unfrequently found themselves placed in an unenviable position by the honest inquiries of some thinking urchin, who has demanded why "one noun governs another in the possessive case," as "master's slave;" why there are more tenses than three; what is meant by a neuter verb, which "signifies neither action nor passion;" or an "intransitive verb," which expresses the highest possible action, but terminates on no object; a cause without an effect; why that is sometimes a pronoun, sometimes an adjective, and not unfrequently a conjunction, &c....