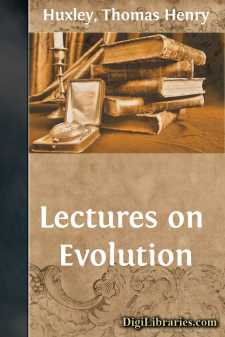 I. THE THREE HYPOTHESES RESPECTING THE HISTORY OF NATURE

We live in and form part of a system of things of immense diversity and perplexity, which we call Nature; and it is a matter of the deepest interest to all of us that we should form just conceptions of the constitution of that system and of its past history. With relation to this universe, man is, in extent, little more than a mathematical point; in duration but a fleeting shadow; he is a mere reed shaken in the winds of force. But as Pascal long ago remarked, although a mere reed, he is a thinking reed; and in virtue of that wonderful capacity of thought, he has the power of framing for himself a symbolic conception of the universe, which, although doubtless highly imperfect and inadequate as a picture of the great whole, is yet sufficient to serve him as a chart for the guidance of his practical affairs. It has taken long ages of toilsome and often fruitless labour to enable man to look steadily at the shifting scenes of the phantasmagoria of Nature, to notice what is fixed among her fluctuations, and what is regular among her apparent irregularities; and it is only comparatively lately, within the last few centuries, that the conception of a universal order and of a definite course of things, which we term the course of Nature, has emerged.

But, once originated, the conception of the constancy of the order of Nature has become the dominant idea of modern thought. To any person who is familiar with the facts upon which that conception is based, and is competent to estimate their significance, it has ceased to be conceivable that chance should have any place in the universe, or that events should depend upon any but the natural sequence of cause and effect. We have come to look upon the present as the child of the past and as the parent of the future; and, as we have excluded chance from a place in the universe, so we ignore, even as a possibility, the notion of any interference with the order of Nature. Whatever may be men's speculative doctrines, it is quite certain that every intelligent person guides his life and risks his fortune upon the belief that the order of Nature is constant, and that the chain of natural causation is never broken.

In fact, no belief which we entertain has so complete a logical basis as that to which I have just referred. It tacitly underlies every process of reasoning; it is the foundation of every act of the will. It is based upon the broadest induction, and it is verified by the most constant, regular, and universal of deductive processes. But we must recollect that any human belief, however broad its basis, however defensible it may seem, is, after all, only a probable belief, and that our widest and safest generalisations are simply statements of the highest degree of probability. Though we are quite clear about the constancy of the order of Nature, at the present time, and in the present state of things, it by no means necessarily follows that we are justified in expanding this generalisation into the infinite past, and in denying, absolutely, that there may have been a time when Nature did not follow a fixed order, when the relations of cause and effect were not definite, and when extra-natural agencies interfered with the general course of Nature....