Learning to Fly A Practical Manual for Beginners 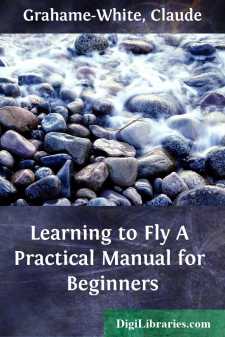 Only eight years ago, in 1908, it was declared impossible for one man to teach another to fly. Those few men who had risen from the ground in aeroplanes, notably the Wright brothers, were held to be endowed by nature in some very peculiar way; to be men who possessed some remarkable and hitherto unexplained sense of equilibrium. That these men would be able to take other men—ordinary members of the human race—and teach them in their turn to navigate the air, was a suggestion that was ridiculed. But Wilbur Wright, after a series of brilliant flights, began actually to instruct his first pupils; doing so with the same care and precision, and the same success, that had characterised all his pioneer work. And these first men who were taught to fly on strange machines—as apart from the pioneers who had taught themselves to fly with craft of their own construction—made progress which confounded the sceptics. They went in easy and leisurely fashion from stage to stage, and learned to become aviators without difficulty, and mainly without accident.

After this, increasing in numbers from two or three to a dozen, and from a dozen to fifty and then a hundred, the army of airmen grew until it could be totalled in thousands. Instead of being haphazard, the teaching of men to fly became a business. Flying schools were established; courses of tuition were arranged; certain pilots specialised in the work of instruction. It was shown beyond doubt that, instead of its being necessary for an aviator to be a species of acrobat, any average man could learn to fly.

Certainly a man who intends to fly should be constitutionally sound; this point is important. When in an aeroplane, one passes very quickly through the air, and such rapid movement—and also the effect of varying altitudes—entail a certain physical strain. A man with a weak heart might find himself affected adversely by flying; while one whose lungs were not sound might find that his breathing was impeded seriously by a swift passage through the air. More than one fatality, doubtful as to its exact cause, has been attributed to the collapse of a pilot who was not organically sound, or who ascended when in poor health. And here again is an important point. No man, even a normally healthy man, should attempt to pilot a machine in flight when he is feeling unwell. In such cases the strain of flying, and the effect of the swift motion through the air, may cause a temporary collapse; and in the air, when a man is alone in a machine, any slight attack of faintness may be sufficient to bring about a fatality.

A fair judgment of speed, and an eye for distance, are very helpful to the man who would learn to fly, and it is here that a man who has motored a good deal, driving his own car, is at advantage at first over one who has not. But otherwise, and writing generally, any man of average quickness of movement, of average agility, can learn without difficulty to control an aeroplane in flight. It is wrong to imagine that exceptional men are required....