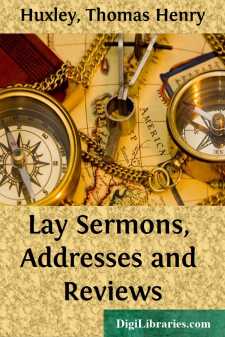 ON THE ADVISABLENESS OF IMPROVING NATURAL KNOWLEDGE.

This time two hundred years ago—in the beginning of January, 1666—those of our forefathers who inhabited this great and ancient city, took breath between the shocks of two fearful calamities, one not quite past, although its fury had abated; the other to come.

Within a few yards of the very spot on which we are assembled, so the tradition runs, that painful and deadly malady, the plague, appeared in the latter months of 1664; and, though no new visitor, smote the people of England, and especially of her capital, with a violence unknown before, in the course of the following year. The hand of a master has pictured what happened in those dismal months; and in that truest of fictions, "The History of the Plague Year," Defoe shows death, with every accompaniment of pain and terror, stalking through the narrow streets of old London, and changing their busy hum into a silence broken only by the wailing of the mourners of fifty thousand dead; by the woful denunciations and mad prayers of fanatics; and by the madder yells of despairing profligates.

But, about this time in 1666, the death-rate had sunk to nearly its ordinary amount; a case of plague occurred only here and there, and the richer citizens who had flown from the pest had returned to their dwellings. The remnant of the people began to toil at the accustomed round of duty, or of pleasure; and the stream of city life bid fair to flow back along its old bed, with renewed and uninterrupted vigour.

The newly kindled hope was deceitful. The great plague, indeed, returned no more; but what it had done for the Londoners, the great fire, which broke out in the autumn of 1666, did for London; and, in September of that year, a heap of ashes and the indestructible energy of the people were all that remained of the glory of five-sixths of the city within the walls.

Our forefathers had their own ways of accounting for each of these calamities. They submitted to the plague in humility and in penitence, for they believed it to be the judgment of God. But, towards the fire they were furiously indignant, interpreting it as the effect of the malice of man,—as the work of the Republicans, or of the Papists, according as their prepossessions ran in favour of loyalty or of Puritanism.

It would, I fancy, have fared but ill with one who, standing where I now stand, in what was then a thickly peopled and fashionable part of London, should have broached to our ancestors the doctrine which I now propound to you—that all their hypotheses were alike wrong; that the plague was no more, in their sense, Divine judgment, than the fire was the work of any political, or of any religious, sect; but that they were themselves the authors of both plague and fire, and that they must look to themselves to prevent the recurrence of calamities, to all appearance so peculiarly beyond the reach of human control—so evidently the result of the wrath of God, or of the craft and subtlety of an enemy.

And one may picture to oneself how harmoniously the holy cursing of the Puritan of that day would have chimed in with the unholy cursing and the crackling wit of the Rochesters and Sedleys, and with the revilings of the political fanatics, if my imaginary plain dealer had gone on to say that, if the return of such misfortunes were ever rendered impossible, it would not be in virtue of the victory of the faith of Laud, or of that of Milton; and, as little, by the triumph of republicanism, as by that of monarchy....