Kelly Miller's History of the World War for Human Rights 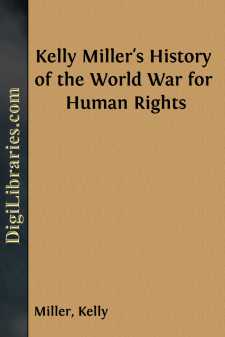 THE NEGRO'S PART IN THE WAR

By Professor Kelly Miller, the Well-Known Thinker and Writer.

This treatise will set forth the black man's part in the world's war with the logical sequence of facts and the brilliant power of statement for which the author is famous. The mere announcement that the author of "Race Adjustment," "Out of the House of Bondage," and "The Disgrace of Democracy" is to present a history of the Negro in the great world conflict, is sufficient to arouse expectancy among the wide circle of readers who eagerly await anything that flows from his pen.

In this treatise, Professor Miller will trace briefly, but with consuming interest, the relation of the Negro to the great wars of the past. He will point out the never-failing fount of loyalty and patriotism which characterizes the black man's nature, and will show that the Negro has never been a hireling, but has always been characterized by that moral energy which actuates all true heroism.

The conduct of the Negro in the present struggle will be set forth with a brilliant and pointed pen. The idea of three hundred thousand American Negroes crossing three thousand miles of sea to fight against autocracy of the German crown constitutes the most interesting chapter in the history of this modern crusade against an unholy cause. The valor and heroism of the Afro-American contingent were second to none according to the unanimous testimony of those who were in command of this high enterprise.

The story of Negro officers in command of troops of their own color will prove the wisdom of a policy entered upon with much distrust and misgiving. It is just here that Professor Miller reaches the high-water mark. Here is a story never told before, because the world has never before witnessed Negro officers in large numbers participating in the directive side of war waged on the high level of modern science and system.

Professor Miller's treatise carries its own prophecy. He logically enough forecasts the future of the race in glowing colors as the result of his loyal and patriotic conduct in this great world epoch.

The author wisely queries: "When, hereafter, the Negro asks for his rights as an American citizen, where can the American be found with the heart or the hardihood to say him, Nay?"

The work will be profusely illustrated.

While the underlying causes of the greatest war in all history must be traced far back into the centuries, the one great object of the conflict which was precipitated by the assassination of the Archduke Francis Ferdinand of Austria, in Bosnia, at the end of June, 1914, is the ultimate determination as to whether imperialism as exemplified in the government of Germany shall rule the world, or whether democracy shall reign.

Whenever men or nations disregard those principles which society has laid down for their conduct in modern civilized life, and obligation and duty are forgotten in the desire for self-advancement, conflict results.

Since the days of Athens and Sparta the world's greatest wars have in the main been conflicts of ideals—democracy being arrayed against oligarchy—men fighting for individual rights as against militarism and military domination....