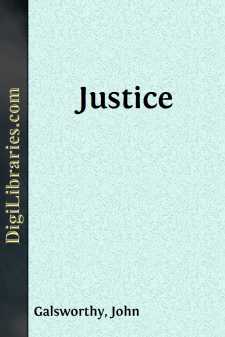 ACT I The scene is the managing clerk's room, at the offices of Jamesand Walter How, on a July morning. The room is old fashioned,furnished with well-worn mahogany and leather, and lined withtin boxes and estate plans. It has three doors. Two of themare close together in the centre of a wall. One of these twodoors leads to the outer office, which is only divided from themanaging clerk's room by a partition of wood and clear glass;and when the door into this outer office is opened there can beseen the wide outer door leading out on to the stone stairway ofthe building. The other of these two centre doors leads tothe junior clerk's room. The third door is that leading to thepartners' room.The managing clerk, COKESON, is sitting at his table adding upfigures in a pass-book, and murmuring their numbers to himself.He is a man of sixty, wearing spectacles; rather short, with abald head, and an honest, pugdog face. He is dressed in awell-worn black frock-coat and pepper-and-salt trousers.

He again makes a tick. The outer office door is opened, andSWEEDLE, the office-boy, appears, closing the door behind him.He is a pale youth of sixteen, with spiky hair.

COKESON. [With grumpy expectation] And carry one.

SWEEDLE. [Reopening the door] Will you come in, please?

RUTH HONEYWILL comes in. She is a tall woman, twenty-six yearsold, unpretentiously dressed, with black hair and eyes, and anivory-white, clear-cut face. She stands very still, having anatural dignity of pose and gesture.SWEEDLE goes out into the partners' room with the pass-book.

COKESON. [Looking round at RUTH] The young man's out. [Suspiciously] State your business, please.

RUTH. [Who speaks in a matter-of-fact voice, and with a slight West-Country accent] It's a personal matter, sir.

COKESON. We don't allow private callers here. Will you leave a message?

RUTH. I'd rather see him, please.

She narrows her dark eyes and gives him a honeyed look.

COKESON. [Expanding] It's all against the rules. Suppose I had my friends here to see me! It'd never do!

COKESON. [A little taken aback] Exactly! And here you are wanting to see a junior clerk!

COKESON. [Turning full round to her with a sort of outraged interest] But this is a lawyer's office. Go to his private address.

RUTH. He's not there.

COKESON. [Uneasy] Are you related to the party?