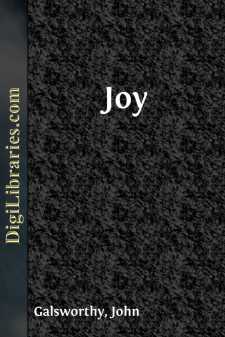 ACT I The time is morning, and the scene a level lawn, beyond whichthe river is running amongst fields. A huge old beech treeovershadows everything, in the darkness of whose hollow manythings are hidden. A rustic seat encircles it. A low wallclothed in creepers, with two openings, divides this lawn fromthe flowery approaches to the house. Close to the wall there isa swing. The sky is clear and sunny. COLONEL HOPE is seated ina garden-chair, reading a newspaper through pince-nez. He isfifty-five and bald, with drooping grey moustaches and aweather-darkened face. He wears a flannel suit and a hat fromPanama; a tennis racquet leans against his chair. MRS. HOPEcomes quickly through the opening of the wall, with roses in herhands. She is going grey; she wears tan gauntlets, and no hat.Her manner is decided, her voice emphatic, as though aware thatthere is no nonsense in its owner's composition. Screened fromsight, MISS BEECH is seated behind the hollow tree; and JOY isperched on a lower branch hidden by foliage.

MRS. HOPE. I told Molly in my letter that she'd have to walk up, Tom.

COLONEL. Walk up in this heat? My dear, why didn't you order Benson's fly?

MRS. HOPE. Expense for nothing! Bob can bring up her things in the barrow. I've told Joy I won't have her going down to meet the train. She's so excited about her mother's coming there's no doing anything with her.

COLONEL. No wonder, after two months.

MRS. HOPE. Well, she's going home to-morrow; she must just keep herself fresh for the dancing tonight. I'm not going to get people in to dance, and have Joy worn out before they begin.

COLONEL. [Dropping his paper.] I don't like Molly's walking up.

MRS. HOPE. A great strong woman like Molly Gwyn! It isn't half a mile.

COLONEL. I don't like it, Nell; it's not hospitable.

MRS. HOPE. Rubbish! If you want to throw away money, you must just find some better investment than those wretched 3 per cents. of yours. The greenflies are in my roses already! Did you ever see anything so disgusting? [They bend over the roses they have grown, and lose all sense of everything.] Where's the syringe? I saw you mooning about with it last night, Tom.

[He retires behind his paper. MRS. HOPE enters the hollow ofthe tree.]

There's an account of that West Australian swindle. Set of ruffians! Listen to this, Nell! "It is understood that amongst the share-holders are large numbers of women, clergymen, and Army officers." How people can be such fools!

[Becoming aware that his absorption is unobserved, he drops hisglasses, and reverses his chair towards the tree.]

MRS. HOPE. [Reappearing with a garden syringe.] I simply won't have Dick keep his fishing things in the tree; there's a whole potful of disgusting worms. I can't touch them. You must go and take 'em out, Tom.

[In his turn the COLONEL enters the hollow of the tree.]

MRS. HOPE. [Personally.] What on earth's the pleasure of it? I can't see! He never catches anything worth eating.