John Marshall and the Constitution; a chronicle of the Supreme court 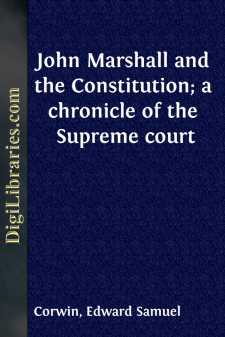 CHAPTER I. The Establishment Of The National Judiciary

The monarch of ancient times mingled the functions of priest and judge. It is therefore not altogether surprising that even today a judicial system should be stamped with a certain resemblance to an ecclesiastical hierarchy. If the Church of the Middle Ages was "an army encamped on the soil of Christendom, with its outposts everywhere, subject to the most efficient discipline, animated with a common purpose, every soldier panoplied with inviolability and armed with the tremendous weapons which slew the soul," the same words, slightly varied, may be applied to the Federal Judiciary created by the American Constitution. The Judiciary of the United States, though numerically not a large body, reaches through its process every part of the nation; its ascendancy is primarily a moral one; it is kept in conformity with final authority by the machinery of appeal; it is "animated with a common purpose"; its members are "panoplied" with what is practically a life tenure of their posts; and it is "armed with the tremendous weapons" which slay legislation. And if the voice of the Church was the voice of God, so the voice of the Court is the voice of the American people as this is recorded in the Constitution.

The Hildebrand of American constitutionalism is John Marshall. The contest carried on by the greatest of the Chief Justices for the principles today associated with his name is very like that waged by the greatest of the Popes for the supremacy of the Papacy. Both fought with intellectual weapons. Both addressed their appeal to the minds and hearts of men. Both died before the triumph of their respective causes and amid circumstances of great discouragement. Both worked through and for great institutions which preceded them and which have survived them. And, as the achievements of Hildebrand cannot be justly appreciated without some knowledge of the ecclesiastical system which he did so much to develop, neither can the career of John Marshall be understood without some knowledge of the organization of the tribunal through which he wrought and whose power he did so much to exalt. The first chapter in the history of John Marshall and his influence upon the laws of the land must therefore inevitably deal with the historical conditions underlying the judicial system of which it is the capstone.

The vital defect of the system of government provided by the soon obsolete Articles of Confederation lay in the fact that it operated not upon the individual citizens of the United States but upon the States in their corporate capacities. As a consequence the prescribed duties of any law passed by Congress in pursuance of powers derived from the Articles of Confederation could not be enforced. Theoretically, perhaps, Congress had the right to coerce the States to perform their duties; at any rate, a Congressional Committee headed by Madison so decided at the very moment (1781) when the Articles were going into effect. But practically such a course of coercion, requiring in the end the exercise of military power, was out of the question....