John Knox and the Reformation 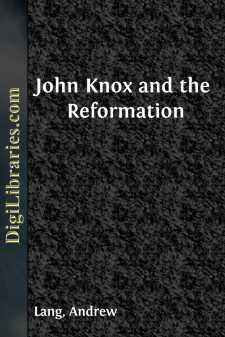 “John Knox, minister, deceased, who had, as was alleged, the most part of the blame of all the sorrows of Scotland since the slaughter of the late Cardinal.”

It is thus that the decent burgess who, in 1572, kept The Diurnal of such daily events as he deemed important, cautiously records the death of the great Scottish Reformer.  The sorrows, the “cumber” of which Knox was “alleged” to bear the blame, did not end with his death.  They persisted in the conspiracies and rebellions of the earlier years of James VI.; they smouldered through the later part of his time; they broke into far spreading flame at the touch of the Covenant; they blazed at “dark Worcester and bloody Dunbar”; at Preston fight, and the sack of Dundee by Monk; they included the Cromwellian conquest of Scotland, and the shame and misery of the Restoration; to trace them down to our own age would be invidious.

It is with the “alleged” author of the Sorrows, with his life, works, and ideas that we are concerned.

John Knox, son of William Knox and of --- Sinclair, his wife, unlike most Scotsmen, unlike even Mr. Carlyle, had not “an ell of pedigree.”  The common scoff was that each Scot styled himself “the King’s poor cousin.”  But John Knox declared, “I am a man of base estate and condition.”   The genealogy of Mr. Carlyle has been traced to a date behind the Norman Conquest, but of Knox’s ancestors nothing is known.  He himself, in 1562, when he “ruled the roast” in Scotland, told the ruffian Earl of Bothwell, “my grandfather, my maternal grandfather, and my father, have served your Lordship’s predecessors, and some of them have died under their standards; and this” (namely goodwill to the house of the feudal superior) “is a part of the obligation of our Scottish kindness.”  Knox, indeed, never writes very harshly of Bothwell, partly for the reason he gives; partly, perhaps, because Bothwell, though an infamous character, and a political opponent, was not in 1562-67 “an idolater,” that is, a Catholic: if ever he had been one; partly because his “History” ends before Bothwell’s murder of Darnley in 1567.

Knox’s ancestors were, we may suppose, peasant farmers, like the ancestors of Burns and Hogg; and Knox, though he married a maid of the Queen’s kin, bore traces of his descent.  “A man ungrateful and unpleasable,” Northumberland styled him: he was one who could not “smiling, put a question by”; if he had to remonstrate even with a person whom it was desirable to conciliate, he stated his case in the plainest and least flattering terms.  “Of nature I am churlish, and in conditions different from many,” he wrote; but this side of his character he kept mainly for people of high rank, accustomed to deference, and indifferent or hostile to his aims.  To others, especially to women whom he liked, he was considerate and courteous, but any assertion of social superiority aroused his wakeful independence.  His countrymen of his own order had long displayed these peculiarities of humour....