John Hus A brief story of the life of a martyr 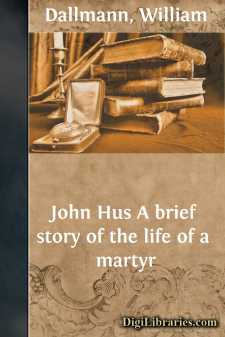 The Youth of Hus.

In a humble hamlet in the southern section of beautiful Bohemia near the Bavarian border of poor peasant parents was born a boy and called Jan—Hus was added from Husinec, his birthplace; some say he saw the light of day on July 6, 1373, but that is not certain.

When about sixteen Hus went to the University of Prag, the first one founded in the German empire by Charles IV in 1348. Here he sang for bread in the streets, like Luther after him, and often had to go to sleep hungry on the bare ground.

WHERE HUS WAS BORN

Though many of the thousands of students from all parts of Europe were rowdies and immoral, the behavior of Hus was excellent and his diligence great. He took part in the rough sports; sometimes he played chess and even won money prizes. To the day of his death none of his many bitter enemies even so much as breathed a suspicion on his pure life. When pardons for sins were publicly sold during a jubilee in 1393, the devout young student gave up his last four pennies to secure this heavenly favor from the Pope.

Jerome of Prag was a fellow student.

In 1393, at a very early age, Hus was made a Bachelor of Arts; in 1394, a Bachelor of Theology; in 1396, a Master of Arts; like Melanchthon, he never took his degree as Doctor of Theology. In 1400, Hus was ordained a priest; in 1401, appointed Dean of the Philosophical Faculty; in 1402, chosen Rector of the University—at an unusually early age. In the same year he became preacher at the important Bethlehem chapel, seating about 1,000 worshipers, founded by John of Milheim in 1391, that the people might hear the Word of God in their own language.

From the very first the powerful preacher made his pulpit potent and popular, even among the nobility; Queen Sophia was a frequent worshiper, made him her confessor, and had him appointed court chaplain.

When Anne, the daughter of Emperor Charles IV, and sister of King Wenzel of Bohemia and of King Sigismund of Hungary, was married to King Richard II of England in 1382, there was much travel between Bohemia and England, and Jerome of Prag brought the writings of Wiclif from Oxford. They spread like wild fire, deeply impressed Hus, and made him an apt pupil and loyal follower of the great "Evangelical Doctor." He saw the dangers ahead and said in a sermon: "O Wiclif, Wiclif, you will trouble the heads of many!"

Converted by missionaries from Greece, the Bohemians never felt quite so dependent on Rome. They had the Bible translated in their own language; Queen Anne took with her the Gospels in Latin and German and Bohemian. In addition Milic of Kremsier and Matthias of Janov had but recently fiercely denounced the wicked lives of popes and prelates and priests. So it came that the teaching of Wiclif and the preaching of Hus fell upon the Bohemian soul as upon a prepared soil.

On May 28, 1403, Master John Huebner in the Church of the Black Rose called attention to certain condemned statements of Wiclif—many of which had been forged....