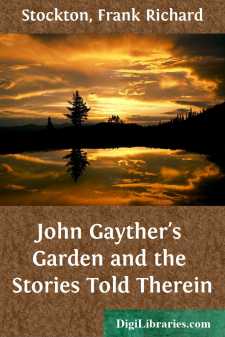 The garden did not belong to John Gayther; he merely had charge of it. At certain busy seasons he had some men to help him in his work, but for the greater part of the year he preferred doing everything himself.

It was a very fine garden over which John Gayther had charge. It extended this way and that for long distances. It was difficult to see how far it did extend, there were so many old-fashioned box hedges; so many paths overshadowed by venerable grape-arbors; and so many far-stretching rows of peach, plum, and pear trees. Fruit, bushes, and vines there were of which the roll need not be called; and flowers grew everywhere. It was one of the fancies of the Mistress of the House—and she inherited it from her mother—to have flowers in great abundance, so that wherever she might walk through the garden she would always find them.

Often when she found them massed too thickly she would go in among them and thin them out with apparent recklessness, pulling them up by the roots and throwing them on the path, where John Gayther would come and find them and take them away. This heroic action on the part of the Mistress of the House pleased John very much. He respected the fearless spirit which did not hesitate to make sacrifices for the greater good, no matter how many beautiful blossoms she scattered on the garden path. John Gayther might have thinned out all this superfluous growth himself, but he knew the Mistress liked to do it, and he left for her gloved hands many tangled jungles of luxuriant bloom.

The garden was old, and rich, and aristocratic. It acted generously in the way of fruit, flowers, and vegetables, as if that were something it was expected to do, an action to which it was obliged by its nobility. It would be impossible for it to forget that it belonged to a fine old house and a fine old family.

John Gayther could not boast of lines of long descent, as could the garden and the family. He was comparatively a new-comer, and had not lived in that garden more than seven or eight years; but in that time he had so identified himself with the place, and all who dwelt upon it, that there were times when a stranger might have supposed him to be the common ancestor to the whole estate.

John understood well the mysterious problems of the tillable earth, and he knew, as well as anybody could know, what answers to expect when he consulted the oracles of nature. He was an elderly man, and the gentle exercises of the garden were suited to the disposition of his mind and body. In days gone by he had been a sailor, a soldier, a miner, a ranchman, and a good many other things besides. In those earlier days, according to his own account, John had had many surprising adventures and experiences; but in these later times his memory was by far the most active and vigorous of all his moving forces. This memory was like a hazel wand in the hands of a man who is searching for hidden springs of water. Whenever he wished it to turn and point in any particular place or direction, it so turned and pointed....