John Forster By One of His Friends 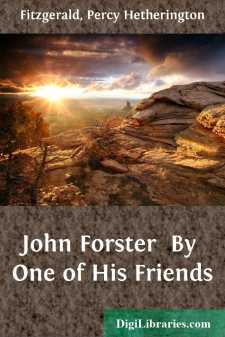 JOHN FORSTER. A MAN OF LETTERS OF THE OLD SCHOOL.

One of the most robust, striking, and many-sided characters of his time was John Forster, a rough, uncompromising personage, who, from small and obscure beginnings, shouldered his way to the front until he came to be looked on by all as guide, friend and arbiter. From a struggling newspaperman he emerged into handsome chambers in Lincoln's Inn Fields, from thence to a snug house in Montague Square, ending in a handsome stone mansion which he built for himself at Palace Gate, Kensington, with its beautiful library-room at the back, and every luxury of "lettered ease."

If anyone desired to know what Dr. Johnson was like, he could have found him in Forster. There was the same social intolerance; the same "dispersion of humbug"; the same loud voice, attuned to a mellifluous softness on occasion, especially with ladies or persons of rank; the love of "talk" in which he assumed the lead—and kept it too; and the contemptuous scorn of what he did not approve. But then all this was backed by admirable training and full knowledge. He was a deeply read, cultivated man, a fine critic, and, with all his arrogance, despotism, and rough "ways," a most interesting, original, delightful person—for those he liked that is, and whom he had made his own. His very "build" and appearance was also that of the redoubtable Doctor: so was his loud and hearty laugh. Woe betide the man on whom he chose to "wipe his shoes" (Browning's phrase), for he could wipe them with a will. He would thus roar you down. It was "intol-er-able"—everything was "in-tol-erable!"—it is difficult to describe the fashion in which he rolled forth the syllables. Other things were "all Stuff!" "Monstrous!" "Incredible!" "Don't tell me!" Indeed I, with many, could find a parallel in the great old Doctor for almost everything he said. Even when there was a smile at his vehemence, he would unconsciously repeat the Doctor's autocratic methods.

Forster's life was indeed a striking and encouraging one for those who believe in the example of "self-made men." His aim was somewhat different from the worldly types, who set themselves to become wealthy, or to have lands or mansions. Forster's more moderate aspiration was to reach to the foremost rank of the literary world: and he succeeded. He secured for himself an excellent education, never spared himself for study or work, and never rested till he had built himself that noble mansion at Kensington, of which I have spoken, furnished with books, pictures, and rare things. Here he could, Mæcenas-like, entertain his literary friends of all degrees, with a vast number of other friends and acquaintances, notable in their walks of life. It is astonishing what a circle he had gathered round him, and how intimate he was with all: political men such as Brougham, Guizot, Gladstone, Forster, Cornwall Lewis (Disraeli he abhorred as much as his friend of Chelsea did, who once asked me, "What is there new about our Jew Premier?"): Maclise, Landseer, Frith, and Stanfield, with dozens of other painters: every writer of the day, almost without exception, late or early....