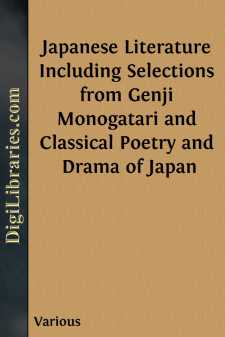 enji Monogatari, the original of this translation, is one of the standard works of Japanese literature. It has been regarded for centuries as a national treasure. The title of the work is by no means unknown to those Europeans who take an interest in Japanese matters, for it is mentioned or alluded to in almost every European work relating to our country. It was written by a lady, who, from her writings, is considered one of the most talented women that Japan has ever produced.

She was the daughter of Fujiwara Tametoki, a petty Court noble, remotely connected with the great family of Fujiwara, in the tenth century after Christ, and was generally called Murasaki Shikib. About these names a few remarks are necessary. The word "Shikib" means "ceremonies," and is more properly a name adopted, with the addition of certain suffixes, to designate special Court offices. Thus the term "Shikib-Kiô" is synonymous with "master of the ceremonies," and "Shikib-no-Jiô" with "secretary to the master of the ceremonies." Hence it might at first sight appear rather peculiar if such an appellation should happen to be used as the name of a woman. It was, however, a custom of the period for noble ladies and their attendants to be often called after such offices, generally with the suffix "No-Kata," indicating the female sex, and somewhat corresponding to the word "madam." This probably originated in the same way as the practice in America of calling ladies by their husbands' official titles, such as Mrs. Captain, Mrs. Judge, etc., only that in the case of the Japanese custom the official title came in time to be used without any immediate association with the offices themselves, and often even as a maiden name. From this custom our authoress came to be called "Shikib," a name which did not originally apply to a person. To this another name, Murasaki, was added, in order to distinguish her from other ladies who may also have been called Shikib. "Murasaki" means "violet," whether the flower or the color. Concerning the origin of this appellation there exist two different opinions. Those holding one, derive it from her family name, Fujiwara; for "Fujiwara" literally means "the field of Wistaria," and the color of the Wistaria blossom is violet. Those holding the other, trace it to the fact that out of several persons introduced into the story, Violet (Murasaki in the text) is a most modest and gentle woman, whence it is thought that the admirers of the work transferred the name to the authoress herself. In her youth she was maid of honor to a daughter of the then prime minister, who became eventually the wife of the Emperor Ichijiô, better known by her surname, Jiôtô-Monin, and who is especially famous as having been the patroness of our authoress. Murasaki Shikib married a noble, named Nobtaka, to whom she bore a daughter, who, herself, wrote a work of fiction, called "Sagoromo" (narrow sleeves). She survived her husband, Nobtaka, some years, and spent her latter days in quiet retirement, dying in the year 992 after Christ. The diary which she wrote during her retirement is still in existence, and her tomb may yet be seen in a Buddhist temple in Kiôto, the old capital where the principal scenes of her story are laid.

The exact date when her story was written is not given in the work, but her diary proves that it was evidently composed before she arrived at old age.

The traditional account given of the circumstances which preceded the writing of the story is this: when the above-mentioned Empress was asked by the Saigû (the sacred virgin of the temple of Ise) if her Majesty could not procure an interesting romance for her, because the older fictions had become too familiar, she requested Shikib to write a new one, and the result of this request was this story....