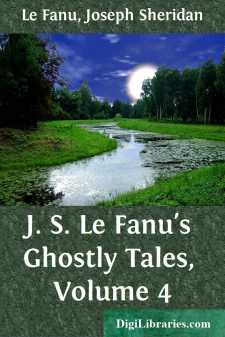 Take my word for it, there is no such thing as an ancient village, especially if it has seen better days, unillustrated by its legends of terror. You might as well expect to find a decayed cheese without mites, or an old house without rats, as an antique and dilapidated town without an authentic population of goblins. Now, although this class of inhabitants are in nowise amenable to the police authorities, yet, as their demeanor directly affects the comforts of her Majesty's subjects, I cannot but regard it as a grave omission that the public have hitherto been left without any statistical returns of their numbers, activity, etc., etc. And I am persuaded that a Commission to inquire into and report upon the numerical strength, habits, haunts, etc., etc., of supernatural agents resident in Ireland, would be a great deal more innocent and entertaining than half the Commissions for which the country pays, and at least as instructive. This I say, more from a sense of duty, and to deliver my mind of a grave truth, than with any hope of seeing the suggestion adopted. But, I am sure, my readers will deplore with me that the comprehensive powers of belief, and apparently illimitable leisure, possessed by parliamentary commissions of inquiry, should never have been applied to the subject I have named, and that the collection of that species of information should be confided to the gratuitous and desultory labours of individuals, who, like myself, have other occupations to attend to. This, however, by the way.

Among the village outposts of Dublin, Chapelizod once held a considerable, if not a foremost rank. Without mentioning its connexion with the history of the great Kilmainham Preceptory of the Knights of St. John, it will be enough to remind the reader of its ancient and celebrated Castle, not one vestige of which now remains, and of the fact that it was for, we believe, some centuries, the summer residence of the Viceroys of Ireland. The circumstance of its being up, we believe, to the period at which that corps was disbanded, the headquarters of the Royal Irish Artillery, gave it also a consequence of an humbler, but not less substantial kind. With these advantages in its favour, it is not wonderful that the town exhibited at one time an air of substantial and semi-aristocratic prosperity unknown to Irish villages in modern times.

A broad street, with a well-paved footpath, and houses as lofty as were at that time to be found in the fashionable streets of Dublin; a goodly stone-fronted barrack; an ancient church, vaulted beneath, and with a tower clothed from its summit to its base with the richest ivy; an humble Roman Catholic chapel; a steep bridge spanning the Liffey, and a great old mill at the near end of it, were the principal features of the town. These, or at least most of them, remain still, but the greater part in a very changed and forlorn condition. Some of them indeed are superseded, though not obliterated by modern erections, such as the bridge, the chapel, and the church in part; the rest forsaken by the order who originally raised them, and delivered up to poverty, and in some cases to absolute decay....