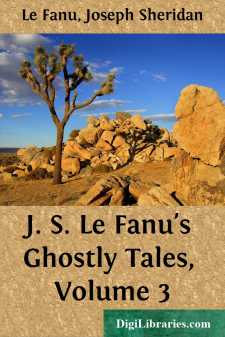 The George and Dragon

The pretty little town of Golden Friars—standing by the margin of the lake, hemmed round by an amphitheatre of purple mountain, rich in tint and furrowed by ravines, high in air, when the tall gables and narrow windows of its ancient graystone houses, and the tower of the old church, from which every evening the curfew still rings, show like silver in the moonbeams, and the black elms that stand round throw moveless shadows upon the short level grass—is one of the most singular and beautiful sights I have ever seen.

There it rises, 'as from the stroke of the enchanter's wand,' looking so light and filmy, that you could scarcely believe it more than a picture reflected on the thin mist of night.

On such a still summer night the moon shone splendidly upon the front of the George and Dragon, the comfortable graystone inn of Golden Friars, with the grandest specimen of the old inn-sign, perhaps, left in England. It looks right across the lake; the road that skirts its margin running by the steps of the hall-door, opposite to which, at the other side of the road, between two great posts, and framed in a fanciful wrought-iron border splendid with gilding, swings the famous sign of St. George and the Dragon, gorgeous with colour and gold.

In the great room of the George and Dragon, three or four of the old habitués of that cozy lounge were refreshing a little after the fatigues of the day.

This is a comfortable chamber, with an oak wainscot; and whenever in summer months the air is sharp enough, as on the present occasion, a fire helped to light it up; which fire, being chiefly wood, made a pleasant broad flicker on panel and ceiling, and yet did not make the room too hot.

On one side sat Doctor Torvey, the doctor of Golden Friars, who knew the weak point of every man in the town, and what medicine agreed with each inhabitant—a fat gentleman, with a jolly laugh and an appetite for all sorts of news, big and little, and who liked a pipe, and made a tumbler of punch at about this hour, with a bit of lemon-peel in it. Beside him sat William Peers, a thin old gentleman, who had lived for more than thirty years in India, and was quiet and benevolent, and the last man in Golden Friars who wore a pigtail. Old Jack Amerald, an ex-captain of the navy, with his short stout leg on a chair, and its wooden companion beside it, sipped his grog, and bawled in the old-fashioned navy way, and called his friends his 'hearties.' In the middle, opposite the hearth, sat deaf Tom Hollar, always placid, and smoked his pipe, looking serenely at the fire. And the landlord of the George and Dragon every now and then strutted in, and sat down in the high-backed wooden arm-chair, according to the old-fashioned republican ways of the place, and took his share in the talk gravely, and was heartily welcome.

"And so Sir Bale is coming home at last," said the Doctor. "Tell us any more you heard since."

"Nothing," answered Richard Turnbull, the host of the George....