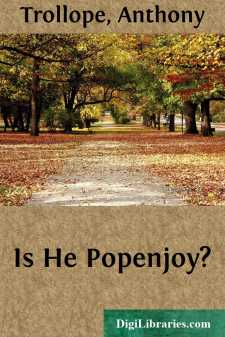 I would that it were possible so to tell a story that a reader should beforehand know every detail of it up to a certain point, or be so circumstanced that he might be supposed to know. In telling the little novelettes of our life, we commence our narrations with the presumption that these details are borne in mind, and though they be all forgotten, the stories come out intelligible at last. "You remember Mary Walker. Oh yes, you do;—that pretty girl, but such a queer temper! And how she was engaged to marry Harry Jones, and said she wouldn't at the church-door, till her father threatened her with bread and water; and how they have been living ever since as happy as two turtle-doves down in Devonshire,—till that scoundrel, Lieutenant Smith, went to Bideford! Smith has been found dead at the bottom of a saw-pit. Nobody's sorry for him. She's in a madhouse at Exeter; and Jones has disappeared, and couldn't have had more than thirty shillings in his pocket." This is quite as much as anybody ought to want to know previous to the unravelling of the tragedy of the Jones's. But such stories as those I have to tell cannot be written after that fashion. We novelists are constantly twitted with being long; and to the gentlemen who condescend to review us, and who take up our volumes with a view to business rather than pleasure, we must be infinite in length and tedium. But the story must be made intelligible from the beginning, or the real novel readers will not like it. The plan of jumping at once into the middle has been often tried, and sometimes seductively enough for a chapter or two; but the writer still has to hark back, and to begin again from the beginning,—not always very comfortably after the abnormal brightness of his few opening pages; and the reader who is then involved in some ancient family history, or long local explanation, feels himself to have been defrauded. It is as though one were asked to eat boiled mutton after woodcocks, caviare, or maccaroni cheese. I hold that it is better to have the boiled mutton first, if boiled mutton there must be.

The story which I have to tell is something in its nature akin to that of poor Mrs. Jones, who was happy enough down in Devonshire till that wicked Lieutenant Smith came and persecuted her; not quite so tragic, perhaps, as it is stained neither by murder nor madness. But before I can hope to interest readers in the perplexed details of the life of a not unworthy lady, I must do more than remind them that they do know, or might have known, or should have known the antecedents of my personages. I must let them understand how it came to pass that so pretty, so pert, so gay, so good a girl as Mary Lovelace, without any great fault on her part, married a man so grim, so gaunt, so sombre, and so old as Lord George Germain. It will not suffice to say that she had done so. A hundred and twenty little incidents must be dribbled into the reader's intelligence, many of them, let me hope, in such manner that he shall himself be insensible to the process....