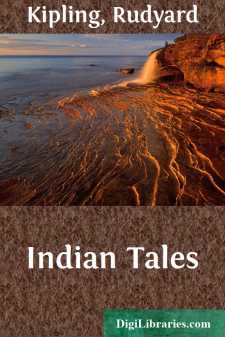 The polo-ball was an old one, scarred, chipped, and dinted. It stood on the mantelpiece among the pipe-stems which Imam Din, khitmatgar, was cleaning for me.

"Does the Heaven-born want this ball?" said Imam Din, deferentially.

The Heaven-born set no particular store by it; but of what use was a polo-ball to a khitmatgar?

"By your Honor's favor, I have a little son. He has seen this ball, and desires it to play with. I do not want it for myself."

No one would for an instant accuse portly old Imam Din of wanting to play with polo-balls. He carried out the battered thing into the veranda; and there followed a hurricane of joyful squeaks, a patter of small feet, and the thud-thud-thud of the ball rolling along the ground. Evidently the little son had been waiting outside the door to secure his treasure. But how had he managed to see that polo-ball?

Next day, coming back from office half an hour earlier than usual, I was aware of a small figure in the dining-room—a tiny, plump figure in a ridiculously inadequate shirt which came, perhaps, half-way down the tubby stomach. It wandered round the room, thumb in mouth, crooning to itself as it took stock of the pictures. Undoubtedly this was the "little son."

He had no business in my room, of course; but was so deeply absorbed in his discoveries that he never noticed me in the doorway. I stepped into the room and startled him nearly into a fit. He sat down on the ground with a gasp. His eyes opened, and his mouth followed suit. I knew what was coming, and fled, followed by a long, dry howl which reached the servants' quarters far more quickly than any command of mine had ever done. In ten seconds Imam Din was in the dining-room. Then despairing sobs arose, and I returned to find Imam Din admonishing the small sinner who was using most of his shirt as a handkerchief.

"This boy," said Imam Din, judicially, "is a budmash—a big budmash. He will, without doubt, go to the jail-khana for his behavior." Renewed yells from the penitent, and an elaborate apology to myself from Imam Din.

"Tell the baby," said I, "that the Sahib is not angry, and take him away." Imam Din conveyed my forgiveness to the offender, who had now gathered all his shirt round his neck, stringwise, and the yell subsided into a sob. The two set off for the door. "His name," said Imam Din, as though the name were part of the crime, "is Muhammad Din, and he is a budmash." Freed from present danger, Muhammad Din turned round in his father's arms, and said gravely, "It is true that my name is Muhammad Din, Tahib, but I am not a budmash. I am a man!"

From that day dated my acquaintance with Muhammad Din. Never again did he come into my dining-room, but on the neutral ground of the garden, we greeted each other with much state, though our conversation was confined to "Talaam, Tahib" from his side, and "Salaam, Muhammad Din" from mine. Daily on my return from office, the little white shirt, and the fat little body used to rise from the shade of the creeper-covered trellis where they had been hid; and daily I checked my horse here, that my salutation might not be slurred over or given unseemly.

Muhammad Din never had any companions....