Indian Legends and Other Poems 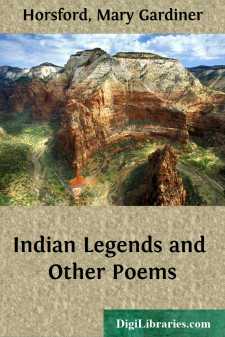 There is an artless tradition among the Indians, related by Irving, of a warrior who saw the thunderbolt lying upon the ground, with a beautifully wrought moccasin on each side of it. Thinking he had found a prize, he put on the moccasins, but they bore him away to the land of spirits, whence he never returned.

During the Revolutionary war, a young American lady was murdered, while dressed in her bridal robe, by a party of Indians, sent by her betrothed to conduct her to the village where he was encamped. After the deed was done, they carried her long hair to her lover, who, urged by a frantic despair, hurried to the spot to assure himself of the truth of the tale, and shortly after threw himself, in battle, on the swords of his countrymen. After this event, the Indians were never successful in their warfare, the spectre of their victim presenting itself continually between them and the enemy.

The worn bird of Freedom had furled o'er our landThe shattered wings, pierced by the despot's rude hand,And stout hearts were vowing, 'mid havoc and strife,To Liberty, fortune, fame, honor, and life. The red light of Morning had scarcely betrayedThe sweet summer blossoms that slept in the glade,When a horseman rode forth from his camp in the wood,And paused where a cottage in loneliness stood.The ruthless marauder preceded him there,For the green vines were torn from the trellis-work fair,The flowers in the garden all hoof-trodden lay,And the rafters were black with the smoke of the fray:But the desolate building he heeded not long,Was it echo, the wind, or the notes of a song...?
Show more
Show less