In Shadow of the Glen 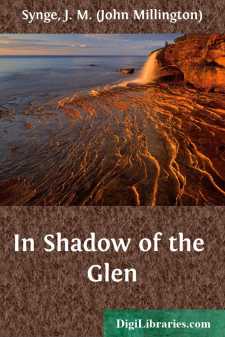 IN THE SHADOW OF THE GLEN A PLAY IN ONE ACT

SCENE.—{The last cottage at the head of a long glen in County Wicklow.

Cottage kitchen; turf fire on the right; a bed near it against the wall with a body lying on it covered with a sheet. A door is at the other end of the room, with a low table near it, and stools, or wooden chairs. There are a couple of glasses on the table, and a bottle of whisky, as if for a wake, with two cups, a teapot, and a home-made cake. There is another small door near the bed. Nora Burke is moving about the room, settling a few things, and lighting candles on the table, looking now and then at the bed with an uneasy look. Some one knocks softly at the door. She takes up a stocking with money from the table and puts it in her pocket. Then she opens the door.}

TRAMP {Outside.} Good evening to you, lady of the house.

Good evening, kindly stranger, it's a wild night, God help you, to be out in the rain falling.

TRAMP It is, surely, and I walking to Brittas from the Aughrim fair.

NORA Is it walking on your feet, stranger?

TRAMP On my two feet, lady of the house, and when I saw the light below I thought maybe if you'd a sup of new milk and a quiet decent corner where a man could sleep {he looks in past her and sees the dead man.} The Lord have mercy on us all!

NORA It doesn't matter anyway, stranger, come in out of the rain.

TRAMP {Coming in slowly and going towards the bed.} Is it departed he is?

NORA It is, stranger. He's after dying on me, God forgive him, and there I am now with a hundred sheep beyond on the hills, and no turf drawn for the winter.

TRAMP {Looking closely at the dead man.} It's a queer look is on him for a man that's dead.

NORA {Half-humorously.} He was always queer, stranger, and I suppose them that's queer and they living men will be queer bodies after.

TRAMP Isn't it a great wonder you're letting him lie there, and he is not tidied, or laid out itself?

NORA {Coming to the bed.} I was afeard, stranger, for he put a black curse on me this morning if I'ld touch his body the time he'ld die sudden, or let any one touch it except his sister only, and it's ten miles away she lives in the big glen over the hill.

TRAMP {Looking at her and nodding slowly.} It's a queer story he wouldn't let his own wife touch him, and he dying quiet in his bed.

NORA He was an old man, and an odd man, stranger, and it's always up on the hills he was thinking thoughts in the dark mist. {She pulls back a bit of the sheet.} Lay your hand on him now, and tell me if it's cold he is surely.

TRAMP Is it getting the curse on me you'ld be, woman of the house? I wouldn't lay my hand on him for the Lough Nahanagan and it filled with gold.

NORA {Looking uneasily at the body.} Maybe cold would be no sign of death with the like of him, for he was always cold, every day since I knew him,—and every night, stranger,—{she covers up his face and comes away from the bed}; but I'm thinking it's dead he is surely, for he's complaining a while back of a pain in his heart, and this morning, the time he was going off to Brittas for three days or four, he was taken with a sharp turn....