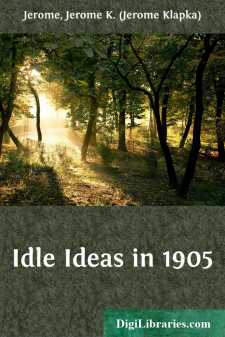 DOES THE YOUNG MAN KNOW EVERYTHING WORTH KNOWING?

I am told that American professors are "mourning the lack of ideals" at Columbia University—possibly also at other universities scattered through the United States. If it be any consolation to these mourning American professors, I can assure them that they do not mourn alone. I live not far from Oxford, and enjoy the advantage of occasionally listening to the jeremiads of English University professors. More than once a German professor has done me the honour to employ me as an object on which to sharpen his English. He also has mourned similar lack of ideals at Heidelberg, at Bonn. Youth is youth all the world over; it has its own ideals; they are not those of the University professor. The explanation is tolerably simple. Youth is young, and the University professor, generally speaking, is middle-aged.

I can sympathise with the mourning professor. I, in my time, have suffered like despair. I remember the day so well; it was my twelfth birthday. I recall the unholy joy with which I reflected that for the future my unfortunate parents would be called upon to pay for me full railway fare; it marked a decided step towards manhood. I was now in my teens. That very afternoon there came to visit us a relative of ours. She brought with her three small children: a girl, aged six; a precious, golden-haired thing in a lace collar that called itself a boy, aged five; and a third still smaller creature, it might have been male, it might have been female; I could not have told you at the time, I cannot tell you now. This collection of atoms was handed over to me.

"Now, show yourself a man," said my dear mother, "remember you are in your teens. Take them out for a walk and amuse them; and mind nothing happens to them."

To the children themselves their own mother gave instructions that they were to do everything that I told them, and not to tear their clothes or make themselves untidy. These directions, even to myself, at the time, appeared contradictory. But I said nothing. And out into the wilds the four of us departed.

I was an only child. My own infancy had passed from my memory. To me, at twelve, the ideas of six were as incomprehensible as are those of twenty to the University professor of forty. I wanted to be a pirate. Round the corner and across the road building operations were in progress. Planks and poles lay ready to one's hand. Nature, in the neighbourhood, had placed conveniently a shallow pond. It was Saturday afternoon. The nearest public-house was a mile away. Immunity from interference by the British workman was thus assured. It occurred to me that by placing my three depressed looking relatives on one raft, attacking them myself from another, taking the eldest girl's sixpence away from her, disabling their raft, and leaving them to drift without a rudder, innocent amusement would be provided for half an hour at least.

They did not want to play at pirates. At first sight of the pond the thing that called itself a boy began to cry. The six-year-old lady said she did not like the smell of it....