Human Traits and their Social Significance 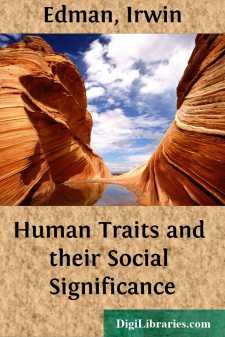 This book was written, originally and primarily, for use in a course entitled "Introduction to Contemporary Civilization," required of all Freshmen in Columbia College. It is an attempt to give a bird's-eye view of the processes of human nature, from man's simple inborn impulses and needs to the most complete fulfillment of these in the deliberate activities of religion, art, science, and morals. It is hoped that the book may give to the student and general reader a knowledge of the fundamentals of human nature and a sense of the possibilities and limits these give to human enterprise.

Part I consists of an analysis of the types of behavior, a survey of individual traits and their significance in social life, a brief consideration of the nature and development of the self, individual differences, language and communication, racial and cultural continuity. Those fruits of psychological inquiry have been stressed which bear most strikingly on the relations of men in our present-day social and economic organization. In consequence, there has been a deliberate exclusion of purely technical or controversial material, however interesting. The psychological analysis is in general based upon the results of the objective inquiries into human behavior which have been so fruitfully conducted in the last twenty-five years by Thorndike and Woodworth. To the work of the first-mentioned, the author is particularly indebted.

Part II is a brief analysis, chiefly psychological in character, of the four great activities of the human mind and imagination—religion, art, science, and morals. These are discussed as normal though complex activities developed, through the process of reflection, in the fulfillment of man's inborn impulses and needs. Thus descriptively to treat these spiritual enterprises implies on the part of the author a naturalistic viewpoint whose main outlines have been fixed for this generation by James, Santayana, and Dewey. To the last-named the writer wishes to express the very special obligation that a pupil owes to a great teacher.

Page iv The book as a whole, so far as can be judged from the experience the author and others have had in using it during the past year as a text at Columbia, should fit well into any general course in social psychology. It has been increasingly realized that the student's understanding of contemporary problems of government and industry is immensely clarified by a knowledge of the human factors which they involve. This volume supplies a brief account of the essential facts of human behavior with especial emphasis on their social consequences. Part I may be independently used, as it has been with success, in a general course in social psychology. Part II, the "Career of Reason," presents material which many instructors find it highly desirable to use in introductory philosophy courses, but for which no elementary texts are available. The usual textbooks deal with the more metaphysical problems to the exclusion of religion, art, morals, and science, humanly the most interesting and significant of philosophical problems....