How to Marry Well 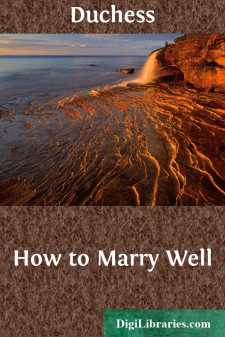 How to marry well

Some girls start in life with the idea that to snub the opposite sex is the surest way of bringing it to their feet. All such imaginings are vain! A man may be amused by the coquettish impertinences of a girl, he may even be attracted by it to a certain extent, but in the end he feels repulsion, and unless it be the exception that proves the rule, hastens away presently to lay his name and fortune at the disposal of some more modest girl.

To marry well is the note that strikes more clearly on the brain of the débutante's mother than on the ear of that interesting person herself. A girl starting in life feels all the world is before her where to choose. She gives, indeed, too little thought to the subject. She comes fresh from the schoolroom into the crowded drawing-room, thinking only how best to enjoy herself. The thought of marriage, if near, is yet so far, that it hardly interferes with her pleasure in the waltz, the theatre, or the eternal afternoon tea.

It is a pity that the educational standard fixed for young girls now-a-days is of so low an order. A smattering of French, a word or two of German, an idea of what music really means, as gained from a three years' acquaintance with scales and movements, and songs without words—this is all! There is, of course, a good deal of reading with scientific masters that serves only to puzzle the brains half given to the matter in hand, and then the girl is emancipated from the schoolroom, and let loose upon society to "be settled in life," says Mamma.

Some of these girls do marry well—surprisingly so! But they are amongst the few. As for the rest, they make their own lives and their husband's a burden to them. Without having time given them to mature their ideas, these latter are hurried into matrimony while still children, without having formed a conception of the terrible responsibility that attaches itself to every human soul who agrees to join itself to another.

These latter do not make good matches in any one sense of the word. The struggling barrister, the clerk, the curate, the brainless masher—such are their prey; and if they make richer prizes than these, still the match cannot be called good; presently there is dis-union as the clever husband finds the pretty but nonsensical wife utterly unable to follow him through the paths of life that Fate has opened out to him.

It is a common idea that men care only for beauty, and are to be attracted by no lesser virtue—if virtue it may be called. This is a most gross error that even the earliest of our thinkers has laid bare. What says Thomas Carew:

"But a smooth and steadfast mind,  Gentle thoughts and calm desires,  Hearts with equal love combined,  Kindle never-dying fires:—  Where these are not, I despise  Lovely cheeks or lips or eyes."