How to Live Rules for Healthful Living Based on Modern Science 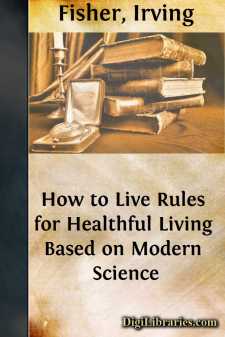 To one who has been an eye-witness of the wonderful achievements of American medical science in the conquest of acute communicable and pestilential diseases in those regions of the earth where they were supposed to be impregnably entrenched, there is the strongest possible appeal in the present rapidly growing movement for the improvement of physical efficiency and the conquest of chronic diseases of the vital organs.

Through the patient, intelligent and often heroic work of our army medical men, and the staff of the United States Public Health Service, death-rates supposedly fixed have been cut in half.

While it is true that to the public mind there is a more lurid and spectacular menace in such diseases as small-pox, yellow fever and plague, medical men and public health workers are beginning to realize that, with the warfare against such maladies well organized, it is now time to give attention to the heavy loss from lowered physical efficiency and chronic, preventable disease, a loss exceeding in magnitude that sustained from the more widely feared communicable diseases.

The insidious encroachment of the chronic diseases that sap the vitality of the individual and impair the efficiency of the race is a matter of increasing importance. The mere extension of human life is not only in itself an end to be desired, but the well digested scientific facts presented in this volume clearly show that the most direct and effective means of lengthening human life are at the same time those that make it more livable and add to its power and capacity for achievement.

Many years ago, Disraeli, keenly alive to influences affecting national prosperity, stated: “Public Health is the foundation on which reposes the happiness of the people and the power of a country. The care of the public health is the first duty of a statesman.” It may well be claimed that the care of individual and family health is the first and most patriotic duty of a citizen.

These are the considerations that have influenced me to co-operate with the life extension movement, and to commend this volume to the earnest consideration of all who desire authoritative guidance in improving their own physical condition or in making effective the knowledge now available for bringing health and happiness to our people.

The purpose of this book is to spread knowledge of Individual Hygiene and thus to promote the aims of the Life Extension Institute. These may be summarized briefly as: (1) to provide the individual and the physician with the latest and best conclusions on individual hygiene; (2) to ascertain the exact and special needs of the individual through periodic health examinations; (3) to induce all persons who are found to be in need of medical attention to visit their physicians.

A sad commentary on the low health-ideals which now exist is that to most people the expression “to keep well” means no more than to keep out of a sick-bed. Hitherto, the subject-matter of hygiene has been considered in its relation to disease rather than to health. In this manual, on the other hand, it is treated in its relation to (1) the preservation of health; (2) the improvement in the physical condition of the individual, and (3) the increase of his vitality. In short, the objects of the manual are positive rather than negative. It aims to include every practical procedure that, according to the present state of our knowledge, an athlete needs in order to make himself superbly “fit,” or that a mental worker needs in order to keep his wits sharpened to a razor-edge. For this reason some suggestions, which might otherwise be regarded as of minor importance, have been included and emphasized. While it is true that a moderate infraction of some of the minor rules of health is not inconsistent with maintaining good health in the sense of keeping out of a sick-bed, such infraction, be it ever so moderate, is utterly inconsistent with good health in the sense of attaining the highest physical and mental efficiency and power....