How to Cook Fish 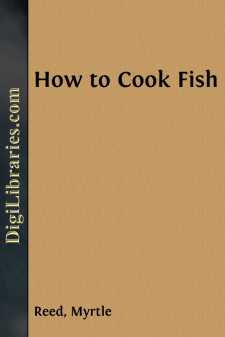 THE CATCHING OF UNSHELLED FISH

"First catch your hare," the old cookery books used to say, and hence it is proper, in a treatise devoted entirely to the cooking of Unshelled Fish, to pay passing attention to the Catching, or what the Head of the House terms the Masculine Division of the Subject. As it is evident that the catching must, in every case precede the cooking—but not too far—the preface is the place to begin.

Shell-fish are, comparatively, slow of movement, without guile, pitifully trusting, and very easily caught. Observe the difference between the chunk of mutton and four feet of string with which one goes crabbing, and the complicated hooks, rods, flies, and reels devoted to the capture of unshelled fish.

An unshelled fish is lively and elusive past the power of words to portray, and in this, undoubtedly, lies its desirability. People will travel for two nights and a day to some spot Page 2 where all unshelled fish has once been seen, taking $59.99 worth of fishing tackle, "marked down from $60.00 for to-day only," rent a canoe, hire a guide at more than human life is worth in courts of law, and work with dogged patience from gray dawn till sunset. And for what? For one small bass which could have been bought at any trustworthy market for sixty-five cents, or, possibly, some poor little kitten-fish-offspring of a catfish—whose mother's milk is not yet dry upon its lips.

Other fish who have just been weaned and are beginning to notice solid food will repeatedly take a hook too large to swallow, and be dragged into the boat, literally, by the skin of the teeth. Note the cheerful little sunfish, four inches long, which is caught first on one side of the boat and then on the other, by the patient fisherman angling off a rocky, weedy point for bass.

But, as Grover Cleveland said: "He is no true fisherman who is willing to fish only when fish are biting." The real angler will sit all day in a boat in a pouring rain, eagerly watching the point of the rod, which never for an instant swerves a half inch from the horizontal. The real angler will troll for miles with a hand line and a spinner, winding in the thirty-five dripping feet of the lure Page 3 every ten minutes, to remove a weed, or "to see if she's still a-spinnin'." Vainly he hopes for the muskellunge who has just gone somewhere else, but, by the same token, the sure-enough angler is ready to go out next morning, rain or shine, at sunrise.

It is a habit of Unshelled Fish to be in other places, or, possibly, at your place, but at another time. The guide can never understand what is wrong. Five days ago, he himself caught more bass than he could carry home, at that identical rocky point. A man from La Porte, Indiana, whom he took out the week before, landed a thirty-eight pound "muskie" in trolling through that same narrow channel. In the forty years that the guide has lived in the place, man and boy, he has never known the fishing to be as poor as it is now. Why, even "ol' Pop Somers" has ceased to fish...!