History of the Conflict Between Religion and Science 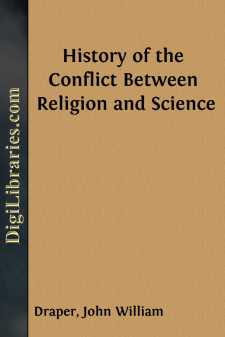 Add to My Favorites
Published: 8 years ago
Downloads: 82
Rating: (0 Votes)

CHAPTER I. THE ORIGIN OF SCIENCE.Religious condition of the Greeks in the fourth centurybefore Christ.—Their invasion of the Persian Empire bringsthem in contact with new aspects of Nature, and familiarizesthem with new religious systems.—The military,engineering, and scientific activity, stimulated by theMacedonian campaigns, leads to the establishment inAlexandria of an institute, the Museum, for the cultivationof knowledge by experiment, observation, and mathematicaldiscussion.—It is the origin of Science.

GREEK MYTHOLOGY. No spectacle can be presented to the thoughtful mind more solemn, more mournful, than that of the dying of an ancient religion, which in its day has given consolation to many generations of men.

Four centuries before the birth of Christ, Greece was fast outgrowing her ancient faith. Her philosophers, in their studies of the world, had been profoundly impressed with the contrast between the majesty of the operations of Nature and the worthlessness of the divinities of Olympus. Her historians, considering the orderly course of political affairs, the manifest uniformity in the acts of men, and that there was no event occurring before their eyes for which they could not find an obvious cause in some preceding event, began to suspect that the miracles and celestial interventions, with which the old annals were filled, were only fictions. They demanded, when the age of the supernatural had ceased, why oracles had become mute, and why there were now no more prodigies in the world.

Traditions, descending from immemorial antiquity, and formerly accepted by pious men as unquestionable truths, had filled the islands of the Mediterranean and the conterminous countries with supernatural wonders—enchantresses, sorcerers, giants, ogres, harpies, gorgons, centaurs, cyclops. The azure vault was the floor of heaven; there Zeus, surrounded by the gods with their wives and mistresses, held his court, engaged in pursuits like those of men, and not refraining from acts of human passion and crime.

A sea-coast broken by numerous indentations, an archipelago with some of the most lovely islands in the world, inspired the Greeks with a taste for maritime life, for geographical discovery, and colonization. Their ships wandered all over the Black and Mediterranean Seas. The time-honored wonders that had been glorified in the "Odyssey," and sacred in public faith, were found to have no existence. As a better knowledge of Nature was obtained, the sky was shown to be an illusion; it was discovered that there is no Olympus, nothing above but space and stars. With the vanishing of their habitation, the gods disappeared, both those of the Ionian type of Homer and those of the Doric of Hesiod.

EFFECTS OF DISCOVERY AND CRITICISM. But this did not take place without resistance. At first, the public, and particularly its religious portion, denounced the rising doubts as atheism. They despoiled some of the offenders of their goods, exiled others; some they put to death....